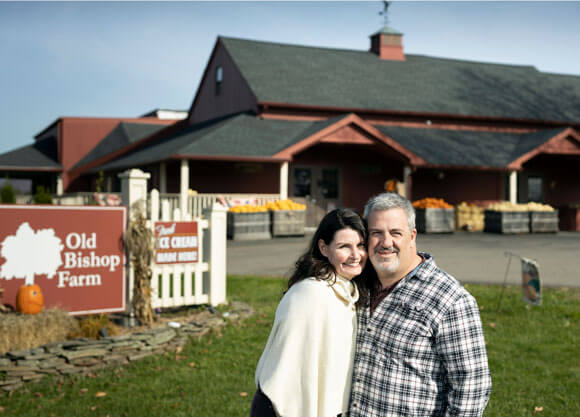 The speech was not a goodbye, but rather a tribute to a boy who changed people’s lives with his kindness and his heart.

“Because of the lessons I have learned, I know this is not the end,” John said as he looked into the faces of so many others who loved Michael. “This is the start of his journey. My other children are all beginning their journeys, too. Michael couldn’t make his on earth. And no matter where his journey takes him, Michael is with me, and I am with him.”

Michael had cerebral palsy with other medical complications that kept him wheelchair bound. But his physical limitations never restricted him from enjoying life and spreading joy to everyone around him.

He grew up liking sports and played on the Cheshire Challengers, a special needs baseball team. Through a teammate, the Torello family was introduced to Team IMPACT, an organization that connects chronically ill children with college teams.

Team IMPACT matched Michael with the Quinnipiac men’s ice hockey program in 2017. He attended practices, games, and grew close with the players and coaches.

“He definitely had a big impact,” said Nick Jermain, ’19, MBA ’20, a former Quinnipiac men’s ice hockey captain. “At the beginning, I thought we were doing him and his family kind of a favor. But as the years went on, it turned out that it was the opposite — we were the ones thanking him for what he did for us.”

Jermain and his teammates would fist bump Michael after games, wheel him around on the ice at practice — the faster, the better — and visit the family’s house for dinners and pool parties.

Michael became “one of the boys” and would get excited when he saw the team. He did what a lot of other kids dream about, his father said. Hockey fans even began recognizing Michael at games.

“The kid who wasn’t included in anything, now was like ‘the man,’” John said.

Michael and his family gave back to Quinnipiac students by sharing their medical experiences.

Michael’s mother, Carolyn Torello ’94, joined her husband at QU a few years back to discuss the importance of communicating with medical professionals, especially with a team-based approach to the needs of a chronically ill child. The focus was on the coordination of care.

John developed a course, Patient-Centered Care, from their speaking engagements and focused on the family’s positive and negative health care experiences with Michael. John often invited guest speakers to class, including hospital executives, physicians and attorneys.

But the day Carolyn came with Michael was the most powerful class of all, he recalled.

“When Carolyn spoke, [students] called me the next day and said, ‘It was awesome. It was the best [class] yet,’” John said.

Others across the Quinnipiac community reached out to the Torello family.

In the School of Computing and Engineering, mechanical engineering students worked with Professor Grant Crawford to develop a prototype for a feeding tube alert. If Michael’s feeding tube leaked while he was sleeping, the device would activate an alarm.

In the School of Health Sciences, Assistant Professor Karen Majeski and students in her assistive technology class made a chair for Michael to help with supporting and positioning his body.

While Michael’s illness deepened the Torellos’ connection to QU, it was also one of the reasons the family purchased Old Bishop Farm in Cheshire in 2015. Because Michael was mostly nonverbal and had limited mobility, his parents planned to have him work at the farm greeting customers, and he enjoyed doing that when he was younger.

The Torellos renovated the farm and created a store featuring homemade apple cider, doughnuts and ice cream. In the future, John plans to build a small barn as a tribute to Michael. It would be called the Sunshine Barn, a reference to his son’s nickname. It would serve as a space for events such as Friendsgiving for the Best Buddies program, which connects middle and high school students with disabilities to those without intellectual and developmental challenges.

Michael’s sister, Julia Torello ’23, works at the family business as do several other Quinnipiac students. The bond between the university and the Torello family did not end with Michael’s death. In some ways, it grew even stronger.

On Oct. 23, the men’s ice hockey team unveiled a memorial sign inside the hockey arena before the North Dakota game. The circular decal with his name was placed on the glass where the Quinnipiac players skate onto the ice. The players fist bump the decal now, just like they used to fist bump Michael through the glass after games.

“He meant the world to us,” captain Wyatt Bongiovanni ’21, MBA ’22, said after the game. “Year after year, he made an impression on us, and he’s been a part of this family longer than I have. To see the impact he has on everyone, it’s just really special.”

While the Sunshine Barn will be another tribute to Michael, his memory is etched into the heart of Old Bishop Farm. Throughout the farm store, the words “sunshine” and “believe” are written on different objects. Most notably, “BELIEVE” is written in large, uppercase letters on the exterior of the store.

John said the word’s meaning is up to individual interpretation, but for the family, it’s about Michael and the difference he made in people’s lives from the moment he was born.

As a baby, Michael spent months at a time in the hospital. Doctors told the family several times that Michael would not survive. After hearing it the third time, John went to talk to his son.

“He smiled, but we thought it was over,” John said. “He just opened his eyes and smiled. It was like a ray of sunshine coming out of the clouds.”

Fifteen years later, on the hardest day of their lives, the Torello family celebrated the boy who brought sunshine to so many at Quinnipiac and everywhere else he went. Eulogies are never easy, but somehow, John found just the right words.

“The smile that lit up the room,” he told everyone at St. Bridget of Sweden Church, “now lights up the world.”