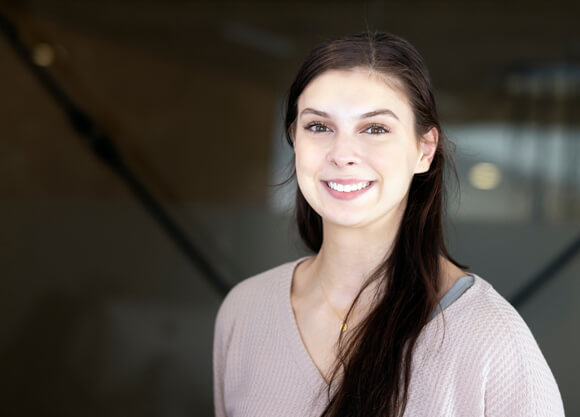 Attending the fireside chat with Quinnipiac President Judy Olian and Hamden Mayor Lauren Garrett was one of the highlights of my educational experience at Quinnipiac. As a woman who will soon be tackling the professional world, it can be daunting and easy to underestimate my abilities and worth. But being able to see and listen to two brilliant women in positions of power was inspiring. Seeing them discuss important topics and issues with such poise and grace made me optimistic for not only my own future but also the future of young women. They have faced obstacles because of their gender but still prevailed and succeeded.

Environments like Quinnipiac where young girls have female role models to look up to are extremely important. I am so grateful to have women like President Olian and Mayor Garrett to look up to.

If you were to ask me when I was a child which sex I thought was more powerful, I would’ve replied with “women” immediately. I witnessed the plethora of work my stay-at-home mom did, from cooking meals three times a day, walking us to school daily and bringing us to various practices and events to helping us with our school projects and homework. While my dad was the one who provided the income, I never saw his job and responsibilities firsthand, so I saw my mom as the person who kept everything running smoothly and under control. In addition to my mom, I had several female leaders that I looked up to, including my elementary school principal and teachers, along with basketball coaches. These women were a big part of my youth, and I looked up to them immensely. I thought my elementary art teacher was the smartest person in the world. She not only supported my artistic abilities but cared about all of her students outside of the classroom and wouldn’t hesitate to give up part of her afternoon to help someone or even just hang out and talk with them. I wanted to be just like her when I grew up and help and inspire others. These examples of female role models in my life were part of the reason that I was absolutely clueless about sexism and thought there was no difference between boys’ and girls’ abilities. My parents had always told me I could accomplish anything I wanted to, and I believed them.

I had been introduced to sports by my parents and played in co-ed leagues where girls performed just as well as the boys and sometimes dominated. I think I became aware of sexism once I saw the differences in support for the NBA and WNBA, and I was baffled. My adolescent mind couldn’t wrap my head around why a great female athlete would be discriminated against or constantly mocked by ignorant people that most likely had no athletic experience. As I got older and used social media more, I constantly saw comments made about female athletes and how “no one cares about them.” Reading this would infuriate me, and I would sometimes respond to comments trying to defend female athletes until I realized that my comments wouldn’t change their minds. No matter what I pointed out to these people, they would still try to tear down women.

As a basketball player, I began to experience the negatives of being a female athlete myself. We had very few spectators at games compared to the boys’ team, and fewer social media posts made about our games alerting fans to come support us. This really bothered me because I knew my team and we were working just as hard as the boys, and yet fewer people cared just because we were girls. This stuck with me, and as I neared the end of high school, I wanted to pick a college where I felt like women’s athletics were celebrated just as much as men's sports. Choosing Quinnipiac was a no-brainer to me. They had made it to the Sweet 16 years prior, were a winning program and had a powerful female head coach for over 20 years. When I arrived, I found myself completely supported while also pushing beyond what I thought were my limits. I loved being surrounded by other driven, like-minded women every day who didn’t listen to gender norms, such as how women shouldn’t be too bulky or aggressive. We constantly competed with each other in practice and faced other teams full of driven women in games. The amount of mental and physical toughness I witnessed in one practice would be enough to silence anyone who thinks women are “soft.”

Through connecting with other female student-athletes on campus, I have been exposed to many sports, including ice hockey, soccer, field hockey and rugby, and have truly become a fan of these sports on the women’s side. Women’s sports need more support from fans as a whole, and I think Quinnipiac is the perfect place to start becoming a fan.

My observations of female leadership also extend beyond the court. I have had the opportunity to learn from so many brilliant women in the form of professors and peers at Quinnipiac. I am overjoyed to attend a school where the president is a woman, as it serves as an everyday example of what women can accomplish with an education. I am a journalism major and switched into the program, not knowing what to expect. I found myself in awe of some of my female classmates who seemed to have it all together and were able to produce such great and professional work. I found myself taking notes from them to improve my own skills. These women were leaders to me without even knowing it. Although I am not sure exactly what I want to do with my journalism degree, I feel prepared because of these aspects of my Quinnipiac education.

It is vital for young girls to have female leaders to look up to and learn from.

I feel blessed to have had many different examples of strong, smart women in my life, and I truly think it has molded my idea of what I can accomplish in the future. I don’t feel as if I have many barriers holding me back because I know my skills and abilities are more than enough to have a successful career and fulfilling life.

I am so happy I chose a school like Quinnipiac to reaffirm these beliefs and instill confidence in myself.