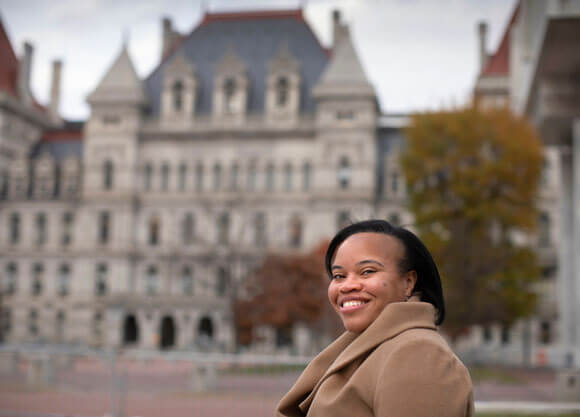 Benjamin tapped Lynch for the prestigious role in September 2021. “I manage the day-to-day for him and make sure the office is operating on all cylinders and is aligned with the governor’s office,” she said. Duties include managing Benjamin’s professional relationships, his staff, calendar, handling any crises, ensuring that he is involved in policy decisions, and working with the governor’s staff.

Benjamin was appointed to his post last August by New York Gov. Kathy Hochul, the former lieutenant governor who ascended to the top job when former Gov. Andrew Cuomo resigned last August. Hochul and Benjamin need to prevail to be the Democratic candidates on November’s gubernatorial ballot. Several people have announced they plan to challenge the duo.

But Lynch doesn’t seem particularly ruffled. She was raised on a diet of politics in West Harlem by her schoolteacher mom, Mary, and her late father, Bill, a Democratic strategist, powerbroker and adviser to politicians including New York City’s first Black mayor, David Dinkins, for whom he worked.

When Bill Lynch died in 2013, his daughter recalled that 2,000 people attended his funeral, including former President Bill Clinton, Democratic presidential candidate Hillary Clinton, and a host of prominent politicians such as former New York City Mayor Bill de Blasio, who hired Lynch to work in his administration two years later.

And she’s run for office twice herself, the first time as a student seeking the presidency of the Black Law Students Association during her second year of law school. “I still have the ‘Vote for Stacy’ campaign buttons,’” she said, laughing. She was re-elected as a 3L.

Lynch was instrumental in bringing Hillary Clinton to the Mount Carmel Campus in 2001 to receive the Thurgood Marshall Award presented annually by BLSA. She remains in touch with Clinton, whom she considers a mentor and good friend.

Clinton was among those who encouraged Lynch, who still lives in West Harlem, to run for a New York City Council seat in the 7th District in 2021. Although she lost, the leadership skills and the insights she gained from that experience continue to prove valuable in her current role.

The common element Lynch brings to the multiple positions she has held during the last 20 years is her ability to build consensus and coalitions — the very same traits she admired in her father and those whose careers he guided.

“I watched some of the best in the world growing up, from Hillary Clinton to Nelson Mandela to David Dinkins. They were great listeners, and I learned a little from each of them. They were in tune with their constituents and the communities they represent, and I often remind myself and others that I am really here to serve the people.”

Stars in Her Eyes

Lynch had no plans to work in city government when she enrolled at Quinnipiac School of Law. As a newly minted graduate of Hampton University in Virginia, and inspired by the movie, “Jerry Maguire,” she planned a career in entertainment law. She already had a job offer upon graduation.

Upon Marshall’s death in 2012, she went to work for her father’s political consulting firm as general counsel, providing legal expertise, lobbying, community relations, issue advocacy, brand positioning, and campaign and coalition building services for prominent clients. When her father died in 2013, her brother chose to take over the firm, and she took some time to soul search.

A good friend suggested that she delve into something new, and Lynch took a job as assistant commissioner of external relations for the New York City Department of Youth and Community Development, overseeing the agency’s external messaging and managing its relationship with City Hall from 2013-15.

“Without a doubt, it was one of the best experiences of my career. I was like a kid in a candy shop,” she said. During that time, she established the Junior Liberty Basketball League for young women in partnership with the New York Liberty of the WNBA.

“Players actually mentored girls in our program, and we toured the Liberty training camp to work out with players,” she said.

Lynch also created a film festival sponsored by SONY, in which children were given video cameras to film sports-related experiences throughout the city. One of her favorite initiatives was the holiday gift drive, when her agency collected and distributed 3,000 toys.

“Bill de Blasio, mayor of New York City, found out I was working there, and asked me to join his administration. The rest is history,” she said with a smile.

She began her next chapter as a senior adviser in de Blasio’s Office of Intergovernmental Affairs, working closely with the deputy mayor for strategic partnerships such as the NAACP, Asian American Federation and the public advocate. Part of the job involved working with the mayor’s wife, Chirlane McCray.

“I managed their public affairs and counseled them as to who they should be talking to and who they shouldn’t, but to be honest, I encouraged them to talk to everyone because that’s how you get information and make informed decisions,” she said.

After a while, she was promoted to deputy director, charged with managing the portfolio for deputy mayors citywide, as well as the mayor and first lady. Lynch continued her philosophy of reaching out to community members to engage them and understand their perspectives.

“I was honest as to what I could and could not do, and I’d say, ‘I’m unable to make this happen, but maybe we can do it this way.’ From those life lessons, I built a good reputation among elected officials and community leaders,” she recalled.

Eventually, some of those leaders asked Lynch this question: “Why not you?”

In 2020, she began to explore a run for a City Council seat in the 7th District, but the pandemic hit, and it hit New York City hard.

“It felt like war time. My colleagues and I came together for a common cause, and I felt like I was one of the few in the administration who was brutally honest with the mayor about the particular needs of Black and Brown communities and identifying areas lacking resources,” she said, adding: “I just could not leave an administration fighting something that no one had ever seen before — it’s not in my character to do something like that.”

By spring of 2021, Lynch was ready to seek that seat. The major issues she emphasized during her campaign were economic development, “wraparound services” to students and families, and public safety and police reform.

During her campaign, she had conversations with Clinton’s team. “Hillary has always supported women running for office, and I would have been the first woman to have this seat. One of the things I learned from Hillary and other female leaders, like Stacey Abrams of Georgia, is it’s not about winning or losing — it’s the lessons you learn and pass to others along the way.”

For her part, Lynch says she hopes to instill in other women the “courage to step out there.”

“I came in pretty late in the game and had a tough uphill battle. Despite that, I wanted to get out the message that it’s important for women to run and represent their communities and discuss issues important to us as leaders of our households and leaders of our districts, cities and states.”

Lynch said she may seek elected office in the future, but for now, her focus is on her chief of staff role. She has known Benjamin, a fellow West Harlem resident, for more than 20 years.

“It’s a 360-degree job, and I’m always on call. I love it. It’s a very public job, and I am enjoying the process,” she said. She splits her time between New York City and the state capital in Albany.

Sometimes, Lynch yearns for advice from someone outside her political circle, and it’s then she turns to Marilyn Ford, Quinnipiac Law professor and the Neil H. Cogan Public Service Chair.

Lynch considers Ford one of the strongest and smartest women she knows. “I lean on her for advice and guidance, particularly as it relates to my journey from attorney to now chief of staff.”

Lynch shared that as she moves up the career ladder, she encounters fewer women, and especially, fewer women of color. “Professor Ford’s insights are valuable as I navigate this world as a Black woman who may not have peers that look like me in a room. She is part of my support system in this universe.”

Ford said she regularly interacted with Lynch during her years at the School of Law, when Lynch served as Ford’s research assistant and presided over BLSA, and she continues to speak with her often. She was not surprised to see Lynch’s email message last fall about her new job with Benjamin, given Lynch’s impressive background.

“As a young attorney on Wall Street, I became aware of Bill Lynch and his role as a cultural icon and coalition builder. He was adept at bringing labor and communities of color into the political process,” Ford said, adding that, like her father, Stacy is committed to service and has developed genuine relationships in many different industries.

“I expect to receive many more texts and phone calls from Stacy as she continues to follow in her late father’s footsteps. I am so proud of what she has accomplished,” Ford said.

Lynch recalled that Jennifer Brown, now dean of the school, was her adviser back in the early 2000s. “She was a good listener, and both professors were like bookends in that they kept me balanced during law school,” she said.

“I’m still connected with people I call friends from QUSL, which provided me so much more than just legal training,” she said. She also remains active in the organization she created — Daughters of the Movement — with the daughters of Harry Belafonte, Diahann Carroll, Al Sharpton, Malcom X and others.

The pandemic taught Lynch that life may be short, so she tries to take advantage of things in the moment, like taking her mother to a Broadway play.

“I want to keep being creative and keep contributing to this world, whether it’s running for office or writing a book or convening people to discuss issues in our community,” she said. 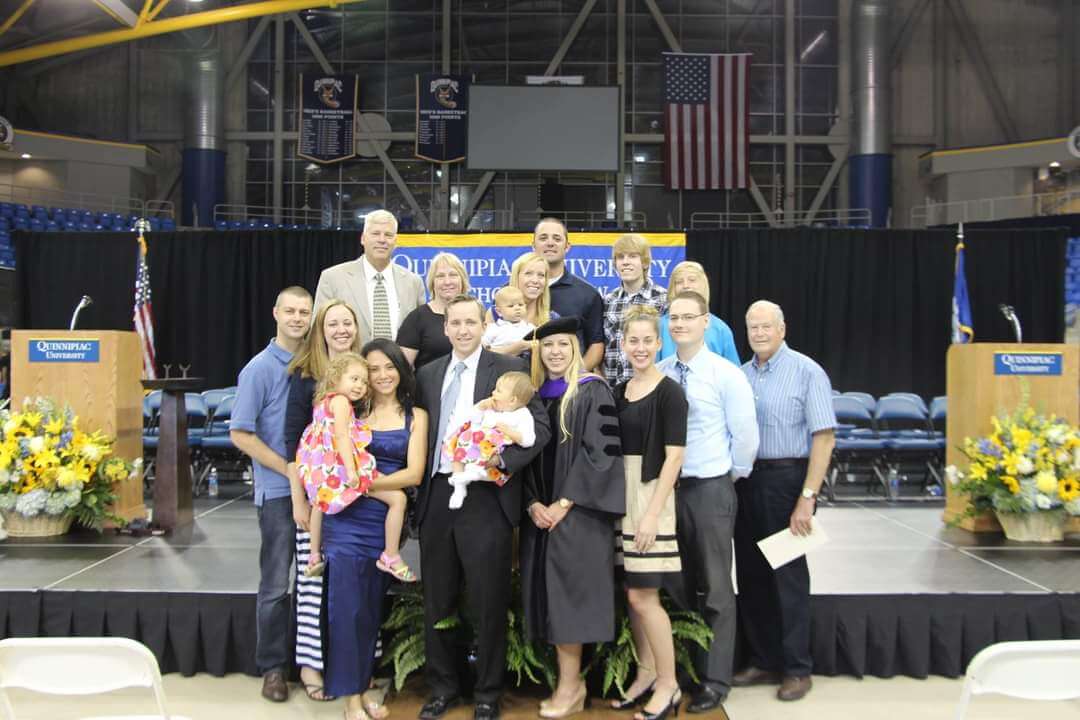 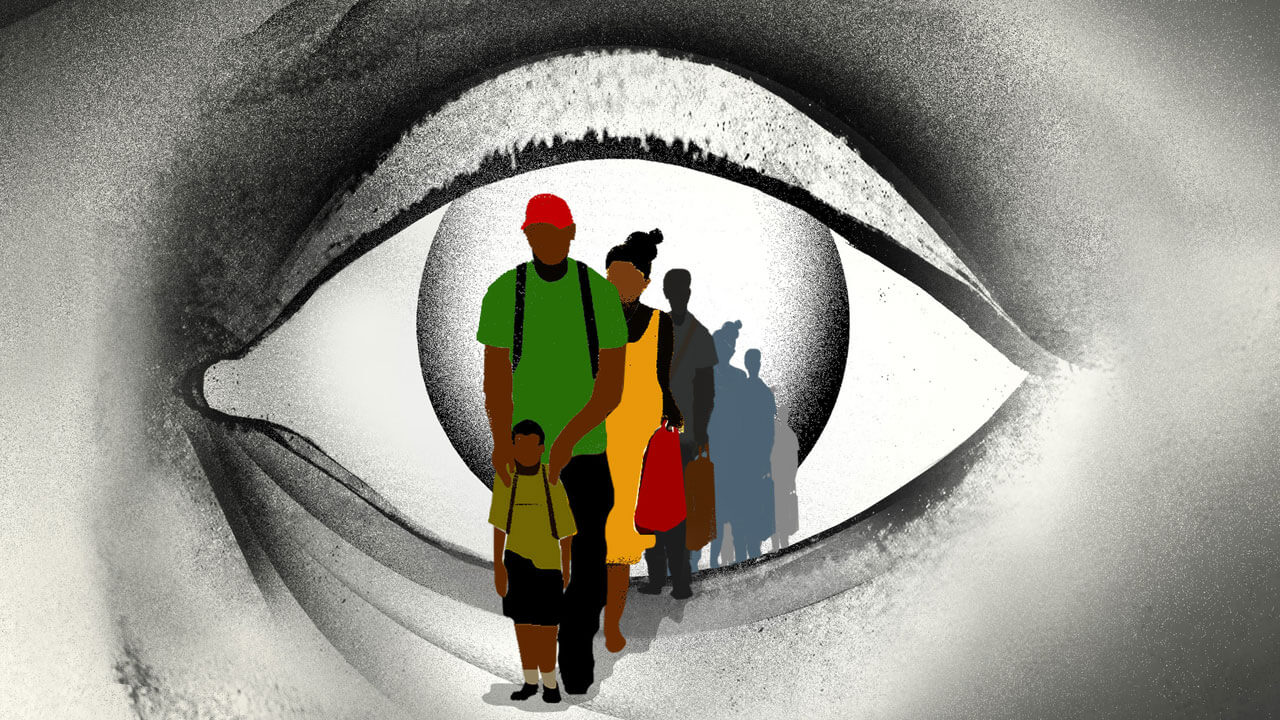 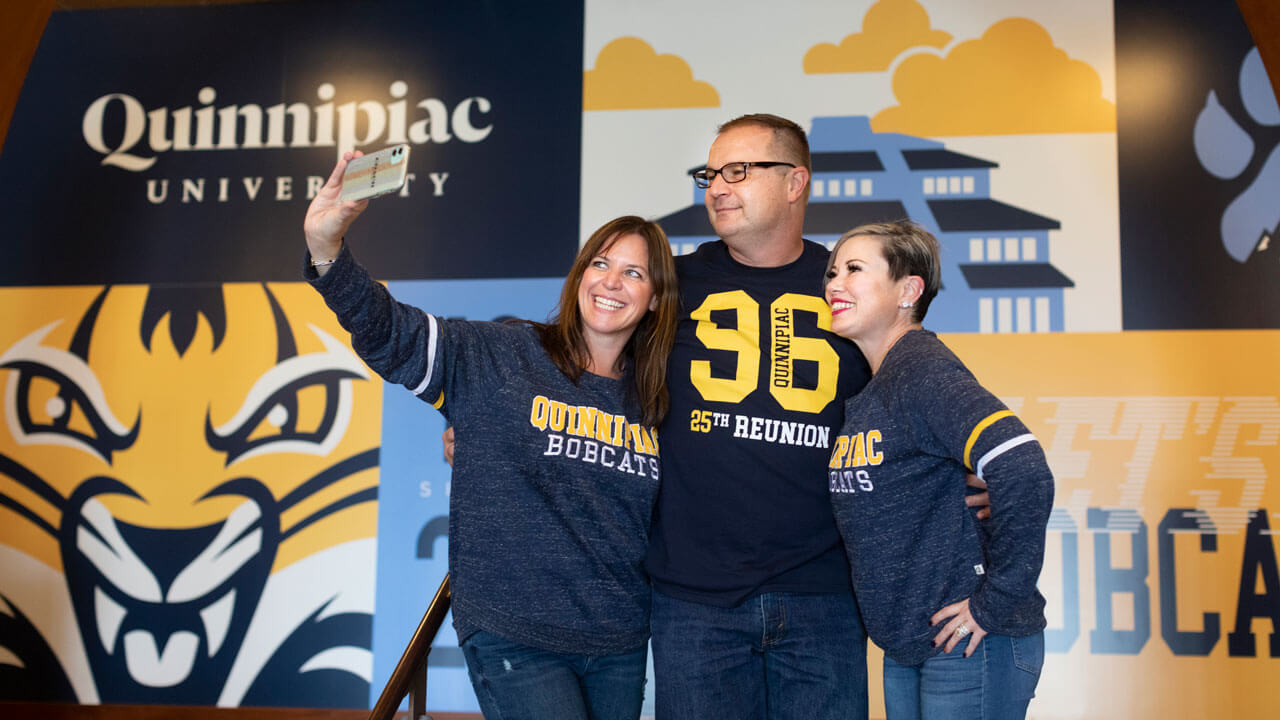