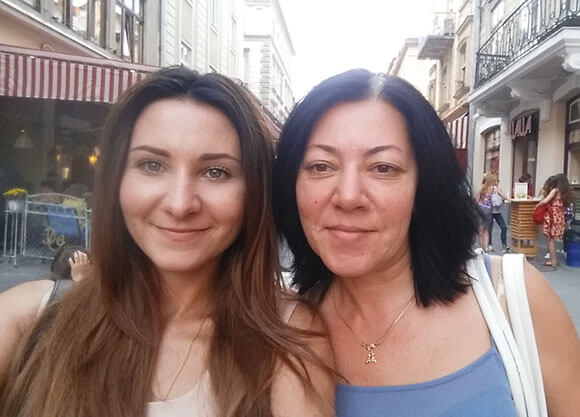 As the Russian invasion of her home country has unfolded, Ukrainian graduate student Natalya Franchi has watched anxiously from her home in Butte, Montana.

Born and raised in the city of Lviv near the Polish border, Franchi has lived in the United States since 2014. But these days, her heart is in Ukraine

“My mom and grandmother are still in Lviv. We talk every day, sometimes four or five times,” she said. “As an only child, I’ve always been very close to my mom. But with everything that is happening, I feel desperate to hear her voice. I worry and think, ‘What if I don’t call now and next time, I can’t reach her because something unthinkable has happened?’ I’m literally calling her every chance I get.”

Up until the invasion began, Franchi found solace in her mother’s assurance that they would be safe. Still, in the weeks leading up to the first attack on Feb. 24, she looked for ways to bring her mother and 90-year-old grandmother to the United States or a safer region outside of Ukraine.

“My mom, like so many in Ukraine, didn’t think Russia would invade. We have been down this road before. I was more worried watching from the U.S., but she was not concerned,” explained Franchi. “She tends to be very anxious about everything, so I figured, ‘She’s there, she must know.’ Her words kept me calm. And now, I try to do the same for her.”

Growing up amid the Baroque, Renaissance and Classic architecture of Lviv, Franchi was inspired to pursue both her undergraduate and master’s degrees in architecture from Lviv Polytechnic National University. In 2010, she visited the U.S. as a member of a cultural work exchange program to Montana, where she first met her husband, Jonah. Four years later, the two married and moved permanently to the U.S.

The influence of her home country continues to inspire her work. Recently, she decided to pursue another master’s in digital communication and media/multimedia from Quinnipiac. Her goal is to become a user experience or UX/UI designer.

“Lviv is one of the most beautiful cities in Europe,” said Franchi. “It looks very much like Prague or Paris with incredible art and architecture melded together. A lot of people travel there just to see the architecture. I loved growing up in Lviv.”

Today, visitors to the city are arriving for another reason. Located near the border of Poland, Lviv offers a degree of protection from Russian attacks. In the early weeks of the war, thousands sought refuge in the city as they made their way to emergency shelters or tried to flee the country. Gas prices surged, and even though Poland waived transportation fees, people stood in line at the train station for hours with no assurance that there would be room to board. For Franchi’s family, leaving is not a possibility.

“Like many caregivers, my mom is held by her responsibility to my grandma,” said Franchi. “I’m grateful that they are in one of the safest places in Ukraine right now. Even so, they have been dealing with a lot. Most everything has remained closed, and she can only leave their apartment for necessities like work or groceries. Sirens go off throughout the day to alert them to take shelter. At first, they would head to the basement of their apartment building. But it’s many flights down and physically hard on my grandma. So now, they shelter in place. After months of sirens, fewer people are reacting to them by hiding.”

Invasion brings out the worst and best of humanity

On the morning of the first attack by Russia, Franchi tried to send money to her family, only to discover that bank accounts had already been frozen in Ukraine. With financial resources cut off, she continues to provide emotional support and news updates to her mom in Lviv. The mother of a 1-year-old son, Franchi is often up in the middle of the night anyway, scrolling through the most recent posts on the war.

“I’m constantly sitting on Facebook and media outlets trying to find some new information that might be useful or that maybe she missed,” said Franchi. “I often take the night shift when I know they are sleeping so that I can alert her if something happens. So far, the news has been accurate and matches the descriptions to what she is experiencing.”

Franchi is frustrated though by the misconceptions she sees online and that traditional obstacles continue to block the asylum path for Ukrainian refugees. Yes, she understands the risks and political implications surrounding interference by the European Union, NATO and world powers such as the U.S.

“They invade us from three sides, on land, sea and air, with jets shooting at civilians. Ukraine doesn’t have the military resources to protect itself because historically, we have never been the aggressor,” she explained. “Russia’s military is bigger, better funded, and we know there is no way we would’ve lasted this long without outside help. Yet, when it comes to direct fighting, we are alone.”

Throughout it all, Franchi continues to anxiously scan for news of additional troops and military supplies to bolster resistance, initially hoping for the designation of a Ukrainian no-fly zone as added protection for civilians caught in the path of war. Proposed and enforced by a third party like the EU, a no-fly zone designation would have prohibited airstrikes over Ukraine. Most recently, she decided to apply for a tourist Visa for her mother to come to the U.S., and is already making plans to visit Ukraine as soon as the war is over.

Since the start of the invasion, the world has seen both the worst and best of humanity. Balancing the grim news as the Russian troops advanced, Franchi found a supportive and active group on social media, with concerned people around the world sending encouragement and resources to those in need. Offers ranged from financial assistance to transportation to invitations from strangers with extra space in their homes for those in need of a safe haven.

“I’ve lost track of how many people have reached out to ask what they can do, and I’m comforted by the outward show of support for Ukraine,” said Franchi. “It’s overwhelming to see world monuments like the Colosseum lit in our colors of yellow and blue. Ultimately, it helps us feel like we are not alone. And in a powerful way, we can feel the world standing with us.”