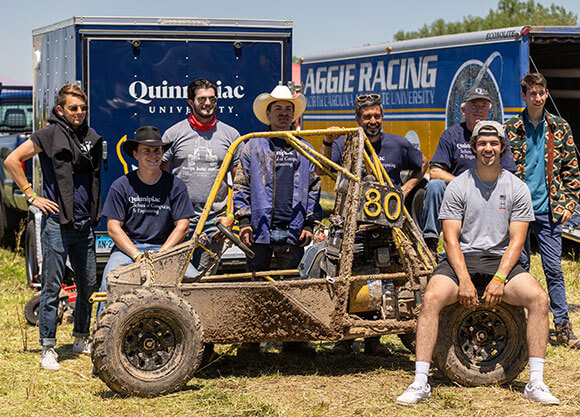 The texts back home started slowly. A few words here and there. But as the Quinnipiac Baja SAE team’s off-road vehicle roared down the dirt path pulling a weighted trailer, Lynn Byers watched her phone blow up.

The first run was impressive. The second run made history.

After working for three years to make its Baja SAE debut, Quinnipiac shocked more than 80 engineering schools this summer and took first place in the sled pull competition at Baja SAE Rochester in upstate New York.

“The students were so excited. It’s just great. It’s an amazing, real-world experience for them,” said Byers, a professor of mechanical engineering and director of the mechanical engineering program in the School of Computing and Engineering. “To see the fruits of their hard work in such a significant, awesome way, it was just incredible.”

In Baja SAE, student teams design, build and drive off-road cars in a series of graded events, including acceleration, maneuverability, sled pull, suspension and endurance. Teams also must pass a safety inspection, make a sales presentation and submit a cost report for their prototype.

Murray, a mechanical engineering major, said although winning was great, he really enjoyed the collaboration among his teammates — and the other college teams.

“Being able to win as a school participating in our first-ever competition was a huge reward for all the time that both the students and the Quinnipiac faculty who were assisting us had put in,” Murray said.

“The competition had an amazing atmosphere; everyone was extremely nice and helpful. Every team was willing to lend you tools or give you extra parts if needed,” Murray added. “The most impressive part was that although it was a competition, all the teams were consistently supporting one another and rooting for each other to do well.”

For Jose Riofrio, an associate teaching professor of mechanical engineering and the Baja SAE team’s adviser, Rochester was just the beginning. He hopes to grow the team and teach even more students how to work together toward a common goal, from the early stages of the car’s design to fixing systems on the fly during competition.

Although other schools have competed in Baja SAE for years, even decades — the innovative design competition began in 1976 at the University of South Carolina — Quinnipiac brought a team to Rochester that believed in each other and believed in its vehicle.

“We had a feeling the sled pull would be good to us because we had a heavy car,” Riofrio said. “We had seen a lot of teams flailing trying to pull it. Some of the top teams couldn’t even make it budge. But when I saw Jack hit the gas, I was happy and excited for the team.”

Byers went a step further: “Without Jose Riofrio, none of this would have happened.”

Petrarca, a mechanical engineering major, was the team’s lead designer and the inspiration to compete in Baja SAE. He currently works in the aerospace industry in California.

“Alex was the impetus for Baja. He did a lot of work. He was super excited about getting it all going,” Byers said. “The first year, with a core group of juniors and seniors, the focus was on the design of the vehicle. The second year, the focus shifted to building the vehicle, but because it’s so complex, it wasn’t quite ready for competition last year.”

Ultimately, the Quinnipiac students built an all-wheel drive, off-road car capable of reaching speeds up to 30 mph — and capable of winning its first sled pull competition.

“It’s mechanical engineering all rolled up into one awesome project — including design for specific criteria and constraints, fabrication, testing and project management,” Byers said. “It’s everything they learned in a single project.”

The final event at the Baja SAE competition is a four-hour endurance race over unforgiving hills, sharp turns and suspension-crushing dips.

“The team’s goal was one lap, but they finished the race,” Byers said proudly. “They broke down twice during the race, but they fixed things with the support and assistance of other teams with more equipment and experience. The collaborative environment there, everyone helping each other, it just gives me the chills.”

Riofrio said the Quinnipiac team developed friendships with several other schools, including Georgia Southern and Montana State, whose mascot also happens to be a bobcat.

Byers and Riofrio credited Dennis Hanlon, the fabrication support specialist in the School of Computing and Engineering, for the pivotal role he played in getting the car ready to compete. Hanlon even accompanied the team to Rochester.

“He was over-the-moon excited for the team,” Riofrio said.

For Quinnipiac’s School of Computing and Engineering students, the Baja SAE program is more than a line on LinkedIn. It’s clear evidence of teamwork, product testing, ingenuity and complex problem solving.

Although this year’s team consisted exclusively of students from the School of Computing and Engineering, the Baja SAE program is open to students across Quinnipiac, Byers said.

Byers thanked the Facilities Department for making space on the North Haven Campus for the students to work on the car. She also thanked the Office of Marketing and Communications for creating the car’s “awesome” graphics and Justin Kile, a professor of industrial engineering and the school’s founding dean, for supporting the start of the program.

“Having a younger School of Computing and Engineering, we’re not entrenched in the way that we’ve always done things,” Byers said. “I think you saw that up close with Baja. So what if we had never done it before? Let’s just try it. So we did — and I’m so glad we did.”