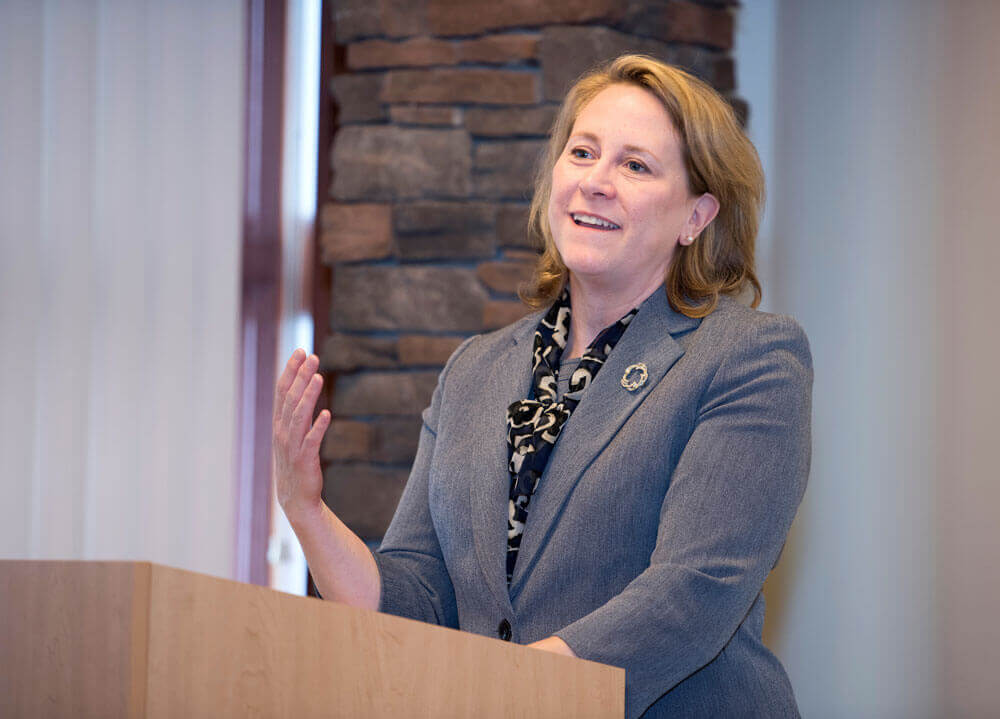 Jennifer Gerarda Brown, dean of the School of Law at Quinnipiac, will receive the Tapping Reeve Legal Educator Award at the Connecticut Bar Association’s annual awards celebration on Wednesday, July 22.

The “Celebrate with the Stars” event will be held virtually from 6 to 8 p.m.

“I am particularly honored to receive this award from the Connecticut Bar Association and excited to join the wonderful legal educators who are prior recipients, including our own Professor Marilyn Ford and Dean Emeritus Brad Saxton,” Brown said. “They, and other recipients of this award, are such shining examples of the way we can promote justice through dedication to educating future lawyers.”

Brown joined the Quinnipiac School of Law faculty in 1994 and became a full professor in 1996. In 1997, she was named the founding director of Quinnipiac’s Center on Dispute Resolution. She served in that capacity until 2013, when she became dean of the law school. In June of 2019, she was appointed interim executive vice president and provost of Quinnipiac University.

“We are delighted that the CBA has chosen Jen for this well-deserved honor and recognition,” Saxton said. “Throughout her distinguished career, Jen has been an extremely effective leader in and champion for efforts to improve legal education, the legal profession, and access to justice both inside and outside of Connecticut.”

Brown received her A.B. from Bryn Mawr College. She earned her J.D. from the University of Illinois College of Law where she was a notes and comments editor of the Law Review. She held a judicial clerkship from 1985-1986 with the Hon. Harold A. Baker, U.S. District Court for the Central District of Illinois.

Brown worked as an associate at the law firm of Winston and Strawn in Chicago from 1986-1989. Prior to coming to Quinnipiac, she was an associate professor at Emory Law School, and over the course of her career she has taught at law schools including The University of Chicago, Georgetown University, Harvard University and Yale University.

She has a lengthy record of scholarly achievements that includes numerous publications, book chapters and invited presentations. In 2008, she received the Honorable Robert C. Zampano Award for Excellence in Mediation and in 2014 she was honored with the Maria Miller Stewart Award from the Connecticut Women’s Education and Legal Fund.

Tapping Reeve was an American lawyer, educator, and jurist. He is recognized as founding an important and influential—and perhaps the first in America—law school in Litchfield, Connecticut.

Rachel Reyes ’21 was named this year’s student employee of the year — at Quinnipiac as well as for the State of Connecticut!