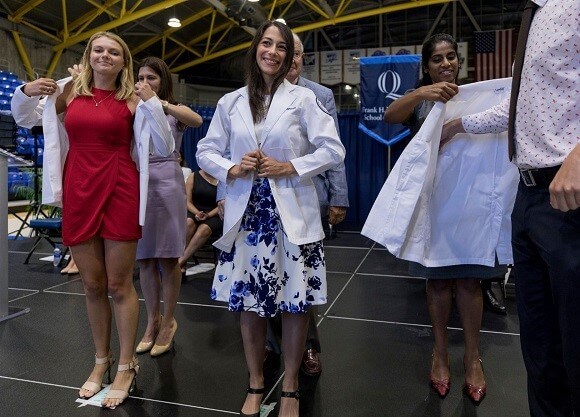 Sheila Eghbali, MD ‘22, a former high school science teacher and native of Iran, knew she would become a family doctor someday. The epiphany came as a 16-year-old volunteer at a pediatric intensive care unit in San Jose, California.

On Thursday, after years of lesson plans and lab reports, Eghbali joined her classmates at the Frank H. Netter MD School of Medicine as part of the largest class in school history, having 99 students.

“Life took me on a detour, but medicine has always been my passion,” Eghbali said.

Whatever diverse paths brought Eghbali and the Class of 2022 to our medical school, Thursday’s White Coat Ceremony at the People’s United Center marked the official the official start of the next phase of their great journey.

Presiding over her first White Coat Ceremony, President Judy Olian celebrated the medical students for pursuing a life of service and purpose.

“You have chosen to give hope to others, to be empathetic and caring in the face of suffering,” Olian said. “Yours is a terrifically noble cause.”

Dr. Bruce Koeppen, founding dean of the School of Medicine, told students that when they put on their white coats, they are wearing a professional identity that will define them in all public and private matters.

“This is a journey that lasts your entire career as physicians,” Koeppen said. “Knowledge and skills are the easy part. Your professional identity is integral to who you are, and cannot be taken on and off.”

Chosen from a pool of more than 6,500 applicants, 20 percent of the new students are from outside of the United States, while another 22 percent are first-generation Americans. Students have volunteered with the likes of AmeriCorp and Habitat for Humanity, and have performed service work in nearly 30 countries.

The ceremony’s keynote speaker, anesthesiologist Dr. Karen Morris-Priester, reminded these future physicians about the power of sacrifice, resilience and optimism. “It’s been a long, hard journey for all of you, and will continue to be — and that’s a good thing,” she said.

Raised in the housing projects of Harrisburg, Pennsylvania, Morris-Priester set her sights on a career in medicine at a young age, but a pregnancy at 16 curtailed her plans. Later, while raising five children as a single mother and working full time, she put herself through school and became a nurse — although she never surrendered her dream to become a doctor.

“You will have good days and you will have bad,” Morris-Priester told the students. “If you show up with your utmost compassion and empathy, you will be enough. You are enough.”

For Elina Kreditor, MD ‘22, a mother of four and an attorney, Morris-Priester’s story of triumph and determination resonated deeply.

“It normalizes what I’m trying to do,” she said. “Seeing that it is something that has been done and can be done is reassuring.”

Prior to enrolling in medical school, Kreditor practiced law in California and New York. The wife of a resident physician, Kreditor saw firsthand how much sacrifice medicine takes, but also how rewarding it is to help patients.

“For me, it’s all about feeling like you’ve lived a life that matters,” Kreditor said.

Like Eghbali and Kreditor, the path to Quinnipiac for Igor Dombrovski, MD ’22, was anything but traditional.

He has worked in labs researching human aging to the immune system’s response to flu vaccines. He also spent a year teaching English in France. But everything changed while he was in the middle of pursing his PhD in comparative literature at the University of Pennsylvania. While shadowing a family physician in his home state of Massachusetts, Dombrovski realized that a human element was missing from his work.

“The importance they place here on the patient-physician relationship and patient-centered medicine resonates with my vision of the physician I want to become,” he said.

As Dombrovski and his fellow students slid their arms into their white coats and recited the Hippocratic Oath, they cemented their commitment to channel the best of themselves and the best of humanity over the next four years.

“This work is a privilege,” Kreditor said, “and today we start it.”