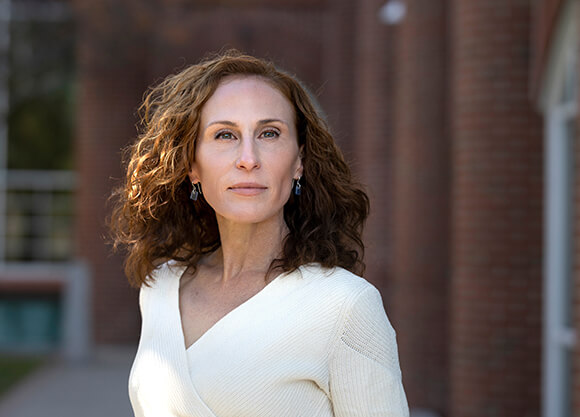 Diana, Princess of Wales, who is fondly remembered as “the people’s princess,” will be celebrated in a new Broadway production debuting this month — thanks, in part, to Quinnipiac professor Blythe Frank.

Frank, director of the cinematic production management master’s program and an assistant professor of film, television and media arts, partnered with long-time Broadway producer Rodney Rigby three years ago to create a development and production company that includes film, TV and Broadway. The company is one of the teams of creative producers of “Diana,” bringing funding to the production, and giving creative feedback.

“I’m excited to be getting involved in theater, as it is where I started, and I am grateful to have a wonderful partner who has opened the door for me to Broadway,” Frank said. “Conversely, I have opened the door to film and TV for him.”

“Diana” was scheduled to open in March, 2020, just as the pandemic was shutting down the country and world — leading the opening to be delayed by nearly two years.

“I think ‘Diana’ is a real Broadway show in that it’s part drama, part spectacle and part entertainment,” Frank said. “It’s also insight into a woman who was in an impossible situation, and for all intents and purposes, alone and struggling to survive. I found, as I hope others do from this show, that Diana was much stronger and more resilient than portrayed. She had finally found her freedom, an ability to thrive, and the love she craved when her life ended. I hope audiences see a new perspective of the love triangle story, Diana’s personal story and new aspects of Diana’s character.”

Frank began her life in the theater as a child actor, who was part of a professional children’s conservatory in Connecticut, before studying at the Eugene O’Neil Theater Center, the School of the Arts in Philadelphia, and the London Academy of Music and Dramatic Art.

She later studied comparative literature in Paris, where she began to appreciate working behind the scenes as a producer and director.

"The natural transition between theater and literature was film, where I saw all of the disciplines that I loved align," she said. "What has helped me achieve my goals was my passion for storytelling and collaboration, but also my sheer will to keep going against all odds."

Frank and Rigby are already looking toward the future, working on two new shows that she hopes will open in the coming years.

She encourages future Broadway producers to commit entirely to their goals, no matter what obstacles arise.

“When they do, look toward the lesson in them, and find the flexibility and ingenuity to keep going,” she urges. "Ninety percent of success is tenacity and inner-strength."