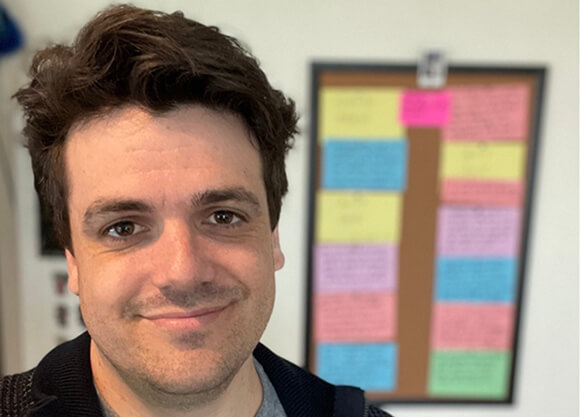 Members of the Quinnipiac community may spot a familiar name in the credits of tonight's episode of CBS' "B Positive." The show will air at 9:30 p.m. ET.

Jack O'Brien '07, a graduate of the School of Communications' media production program, co-wrote tonight's episode. It is the second network show he has written for. Last year, he co-wrote an episode of CBS' "Man With a Plan."

"I learned a lot co-writing this episode with some legendary sitcom writers who have written for shows like "Cheers," "Frasier" and "Modern Family," O'Brien said.

He said Quinnipiac has helped prepare him for success in the television industry.

"In media production, we did a lot of group projects, and one thing you need to know to work in Hollywood is how to get along with all sorts of different people," he said. "Quinnipiac definitely prepared me for that."

O'Brien said students can start preparing for a career now while watching their favorite television shows.

"Watch your favorite episodes of your favorite shows and chart them out on paper," he said. "You get to watch TV without feeling lazy."

O'Brien, who works in various capacities on the show, got his start in the industry as an intern for NBC's Olympics coverage. After graduating from Quinnipiac, he became a page at the Ed Sullivan Theater, home of the "Late Show with David Letterman." He ultimately became audience coordinator for Letterman — where he would write jokes for his monologue.

His other credits include: "Good Fortunate," "The History of Us," "The Perfect Stanleys," "Truth Be Told" and "The McCarthys."