By Cindy Christie, assistant dean for career development in the School of Health Sciences September 08, 2021 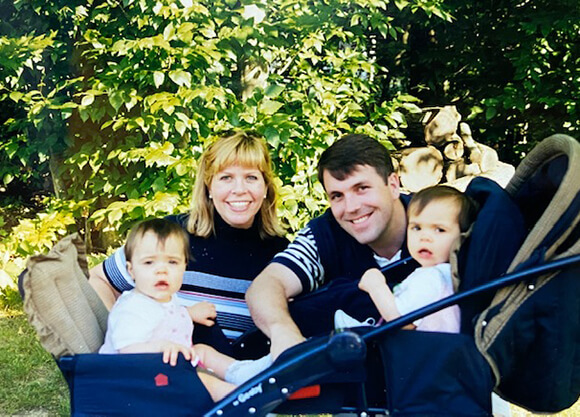 My husband, Bill, worked in New York City from 1993 until 2000. He worked as a bond trader for PaineWebber. Their primary broker was Cantor Fitzgerald, which was situated in the twin towers.

After some serious contemplation, he made the difficult decision to leave working in New York City and change his career so that he wouldn’t be getting on a train before our newborn twin girls were up in the morning and coming home late at night after they were already in bed.

He decided to get into the financial-planning industry and, in the early fall of 2001, he was building his business.

Bill had an appointment in the twin towers on Thursday, September 13, with some of his friends at Cantor Fitzgerald to review their retirement-planning strategies and life insurance.

I am very sad to say that many of his friends were lost on 9/11. I don’t know why Bill didn’t make the appointment on Tuesday instead of Thursday, because if he had made that appointment on September 11, he would have taken the early train to have coffee with them and would’ve been up on the higher floors of Cantor Fitzgerald meeting with all of his friends who died that day and he would’ve been by their side.

I would’ve been a widow with 1-year-old twins and my younger daughter, Claire, would never have been born.

It’s hard to answer exactly how this has changed me (profoundly) but I think you can tell from the story, I truly believe that he was spared that day and that I am very lucky.

He attended many funerals and wakes over the weeks and months after 9/11, and before COVID, we were lucky enough to go to the 9/11 museum and pay our respects.

We found the names of his friends on the wall outside and said a little prayer for each of them, in particular two of his closest friends, Brian H. and Billy M.

Every year I think of them. “Never forget” is a phrase that has a deep meaning to me and my family.