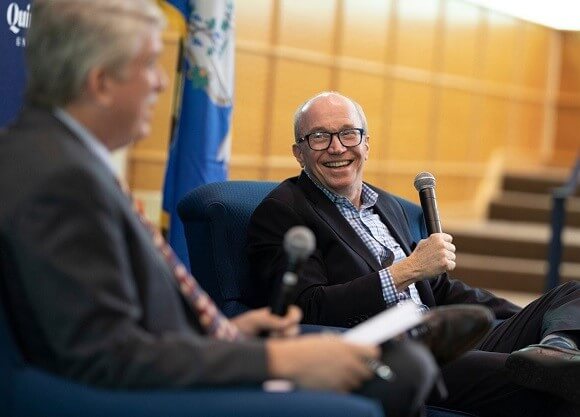 As a 9-year-old boy, Fortune magazine CEO Alan Murray covered Outlook Drive in suburban Pittsburgh like nobody’s business. If a family lost a cat, Murray knew about it. If somebody’s grandmother was visiting, he knew that, too.

Murray filled his pad with stories of swim meets and small town wonder. His mother, Catherine, brought each tale to life on her Corona typewriter, and together, they produced 30 copies of “The Outlook Outlook” at a nickel a copy.

“My mother saved all those newspapers because that’s what mothers do,” Murray said, quietly pleased she also served as his chief archivist. “There’s nothing particularly distinguished about any of them. They were just a collection of facts.”

A lifetime later, facts have never been more important.

Murray visited Quinnipiac earlier this week for a lecture titled, “The Death of Truth: The Future of Journalism in the 21st Century.” His talk marked the debut of a speaker series at the School of Communications with Dean Chris Roush.

If nothing else, Murray is an evangelist of the truth. It is the core and conviction of his work.

Murray’s pursuit of the truth has served him well during a distinguished journalism career with some of the most respected publishers in the industry. Before his current role, Murray oversaw 24 magazines as the chief content officer at Time Inc. Murray also spent more than two decades at The Wall Street Journal in several leadership roles.

But the days of commuter trains packed with newspaper readers in every seat are gone. Today’s digital news is instantly available on smartphones, tablets and computers, often without vetting, fact-checking and publishing corrections when mistakes are made.

“It’s a ‘buyer beware’ world for journalism. In a way, what’s happened is that journalism has become a marketplace,” Murray said. “Now, people are consumers of journalism. This isn’t a satisfactory answer for everyone, but they have to be better consumers. It’s not all that hard to figure out if you’re watching or reading a news site that has only one point of view.”

As print circulation has declined across the board, social media consumption of the news has increased to levels unmatched in legacy journalism. Suddenly, the world is at your fingertips with a swipe and a tap.

Murray, who also served as president of the Pew Research Center from 2012-14, referenced a particularly telling survey conducted during his tenure. The survey revealed that 50 percent of Americans with online access get their news from Facebook.

“No other news organization in the history of the country has ever had that kind of penetration,” Murray said, the weight of the data still resonating in his voice.

For half of the country, news consumption has become news by algorithm, a homogenized script of political echoes and choir responses. There are no fact-checkers or editors here with questions about objectivity, fairness and accuracy.

Artificial intelligence meets natural selection. Which news will you choose?