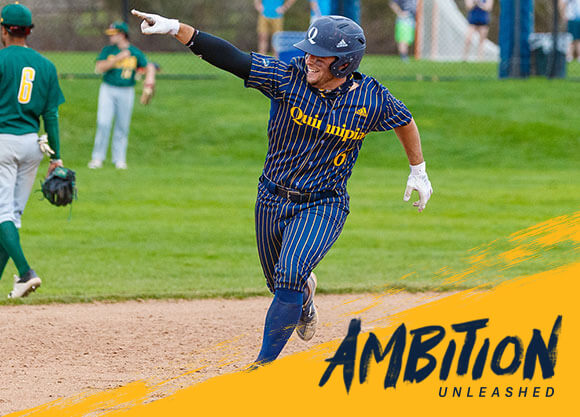 For Colton Bender ’21, being a baseball catcher is in his DNA.

Bender, who was drafted in the 10th round of last year’s Major League Baseball draft by the San Diego Padres, made Bobcat history as the highest draft pick for the university in more than a decade.

Growing up in eastern Connecticut, he can still remember cheering on the Red Sox, and dreaming one day of playing professional ball. He knew to attain that would involve great sacrifice and lots of time practicing.

“It was the only thing I wanted to do growing up,” Bender said, who said he still gets chills thinking about how much he has achieved. “All I wanted to do was play Wiffle ball. I knew I wanted to stick with it. I had a dream and I wanted to follow that dream.”

Throughout high school, he flourished, even hitting a grand slam in the state finals. At Quinnipiac, he was a standout player, earning multiple awards and recognitions — both on and off the field. He also served as a mentor, working with children with special needs through the Little League Challenger Division.

Throughout the college recruitment process, Quinnipiac stood out to him, he said, because of the attitude of the team and coaching staff.

“I fell in love with the place,” Bender said. “I really liked the people there. It was a great group of dudes.”

He excelled at the college level, batting .266 for the Bobcats last year, and led the Bobcats with seven doubles as a senior, finishing second on the team with 25 hits and third with 19 RBIs. He posted a .349 on-base percentage after drawing 11 walks.

“Those years were unbelievable,” he recalled — and then he was drafted.

“That was the single most memorable moment I have had to date,” he said. “You have these dreams since you were 5 years old about doing this job and playing professional baseball — and so when it actually happened, it took a little while to set in.”

The enormity of his accomplishment finally hit him, he said, when he was in California playing for the Lake Elsinore Storm, a minor league affiliate of the Padres.

“I almost lost my breath,” he said. “I was like ‘Wow, this is it. This is what I was hoping and dreaming about for so long.’”

Bender's team continues to support him.

"I am so excited for Colton on getting a chance to live out his dream," Quinnipiac baseball head coach John Delaney said. "He worked constantly for this program over his four years and developed into a true professional. He deserves this opportunity, and I can't wait to see what is in store for him."

But his ambition doesn’t stop here — but rather, extends much further.

“I always want to do better — not just for myself but for my team,” Bender said. “Now that I am here, I want to give back to as many people as I can.”

He said he wants to be the best version of himself.

At the end of the day though, he said it is the process that matters most.

“We all have our own ambitions and set our own goals,” he said. "If you did everything you could, but didn’t get there, it’s OK because you know you gave it your best.”