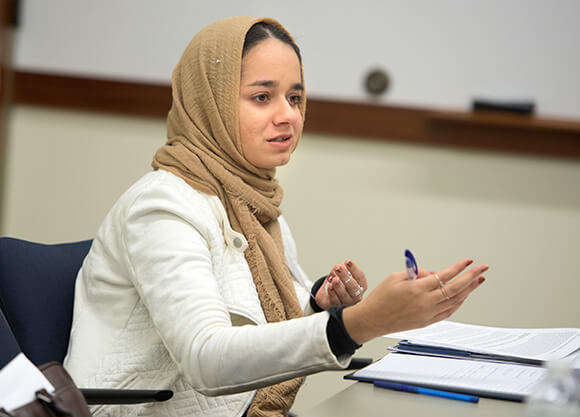 Two Quinnipiac Law students developed a unique perspective on human migration, refugee policy and global ethics during a two-week experiential learning and immersion trip this summer at the University of Oxford in England and Lesvos, Greece.

Taylor Matook, JD ’19, and Amina Seyal, JD ’19, began their experience by completing a one-week intensive workshop at Oxford before conducting fieldwork with refugees on the island of Lesvos. Associate Professor Sheila Hayre, who teaches Immigration and Naturalization Law and supervises students in our Civil Justice Clinic, accompanied Matook and Seyal on the trip.

They studied migration, refugee health care, economic security, sexual violence, water, and habitat and humanitarian policy. They also examined emerging issues in human rights law — including conflict trends, human rights during and after conflict and humanitarian responses. They discussed living conditions in refugee camps, specifically how refugees — including those from Syria and Palestine — from all over the world are detained and housed.

“After studying the refugee crisis for so long and seeing so many photographs of different camps around the world, it is difficult to describe the feeling of seeing a refugee camp with your own eyes for the first time,” said Matook, who noted the experience was even more relevant to her given her Armenian, Syrian and Lebanese heritage.

“It was fascinating to learn about the asylum process on the island of Lesvos and how it is constantly changing to the detriment of the refugees waiting to gain status.”

Matook plans to use the skills she is developing through her Quinnipiac Law education to help others. Back in the U.S., she is active in the Human Trafficking Prevention Project, a student- designed training program that educates hospitality workers on how to identify and report potential cases of abuse.

She also works in the law school’s Civil Justice Clinic on a special immigration juvenile status and asylum case. Under the guidance of Professor Sheila Hayre, Matook is helping young clients seek citizenship in the United States.

“Learning from both academics and human rights advocates at Oxford about the European Union’s response to recent migration was eye-opening. Then being able to witness this encounter first-hand in Greece, where migrants in overcrowded boats had been literally washing up on the Lesvos beaches, gave all of us a new perspective on the laws and policies governing migrants and migration,” said Professor Hayre.

“It was especially poignant that our trip happened while children were being separated from their parents on the U.S.-Mexico border.”

Seyal, who is Pakistani-American, found inspiration among her peers, her professors and the migrants she met on the trip. She speaks Urdu-Hindi, which allowed her to engage directly with the South Asian migrants housed in refugee camps and to hear their stories about leaving home and their ongoing struggles to leave Lesvos and reach their hope-for destinations in other parts of the EU.

“It puts into perspective that while my biggest struggle is completing my legal studies, others are forced to leave behind their homes and families due to forces completely outside of their control,” Matook said. “It reminds me that I have the power to impact others for the better, and I cannot idly sit by without trying.” 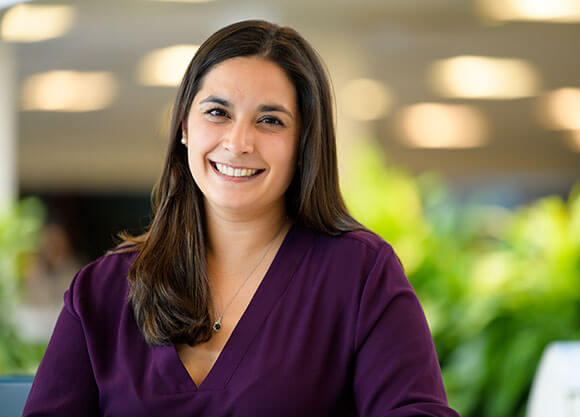 Alexa Massad, JD ’22, will put her new law degree to use next summer when she begins a judicial clerkship with Connecticut Supreme Court Justice Andrew McDonald.

A Quinnipiac law professor will share his lifetime of legal knowledge in a new thriller set to debut this week.

As Americans focus on this year’s local elections, a panel of distinguished speakers advocated for an accessible voting process for all citizens in the U.S.

Stacey Todd JD ’13 was recently sworn in as an Assistant United States Attorney for the Department of Justice. Hired alongside 23 other federal prosecutors, she is aiding in a massive influx of cases in the Northern District of Oklahoma due to recent legislation.