Medical school graduates urged to find their own calling 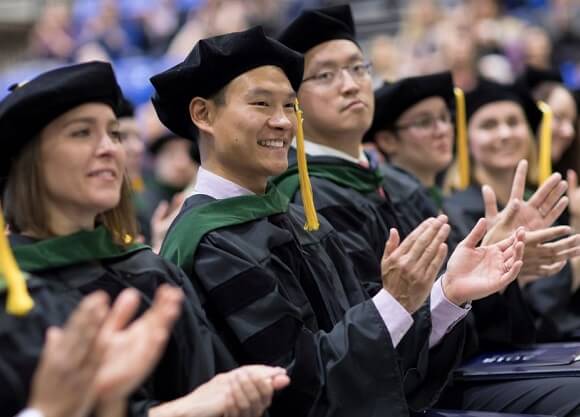 Graduation from medical school is the most sacred event in the academic world, said Dr. Frederick Kaplan, who addressed graduates of the Frank H. Netter MD School of Medicine and their families on May 13.

“You are entrusted today with the care of that which is most sacred — human beings and human life,” said Kaplan.

Kaplan, the chief of the Division of Molecular Orthopaedic Medicine and co-director of the Center for Research in FOP & Related Disorders at the Perelman School of Medicine, University of Pennsylvania, said it was humbling for him to receive an honorary degree from a school that bears the name of his friend and mentor, Dr. Frank H. Netter, the famous medical illustrator. The two worked together in Netter’s Palm Beach, Florida, home on many symposia and atlases they co-authored.

“He was like a great uncle to me — a cauldron of wisdom. I could have listened to him for days, and I did,” Kaplan said. It was during one of these chats that Netter encouraged Kaplan’s move into orthopedic research, and in particular, fibrodysplasia ossificans progressiva (FOP). This career change was prompted by Kaplan’s 1988 meeting with a girl with an exceptionally rare genetic disease that was turning her muscle to bone.

“I explained to Dr. Netter that although the condition was rare, it held lessons for more common bone diseases, and it needed to be solved,” Kaplan recalled, adding that his colleagues thought he was insane. “If I wanted to do research, they told me I should work on common problems like arthritis and joint replacements.”

Netter, who called him Freddie, told him it sounded like a worthwhile cause.

‘“I can picture the effect it has on you,’” Kaplan remembered Netter saying. ‘“Listen to others, but do it your way,’ he would tell me.”

Kaplan said Netter’s quiet wisdom, willingness to listen, and his vision and insight were “absolutely priceless” at a critical time in his early career. “He provided me with the strength to move forward on an incredible scientific mystery, medical catastrophe and grand adventure that is still growing and thriving with enormous medical and scientific progress and tremendous personal fulfillment 30 years later.”

Remarking on Netter’s monumental impact on medical education in the twentieth century, Kaplan said, “Each one of the Netter pictures tells a story. That was his story. You will each find yours. His legacy is part of yours, as it is part of mine.”