Nursing alumna puts lifetime of experiences, empathy to work for patients and their families 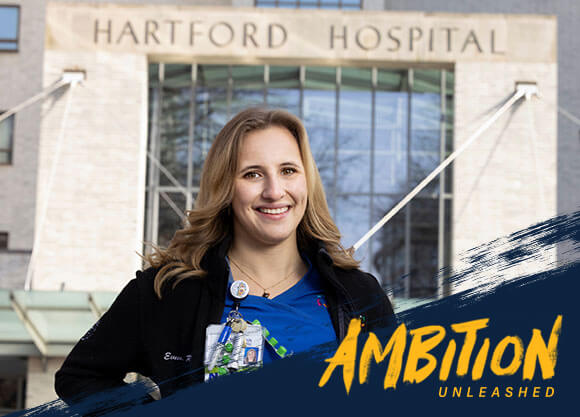 Emma Raboin ’20 originally fell in love with Quinnipiac for both the beauty and technology across its campuses. Little did she know that the connections she would make would help her recognize her dreams and build the foundation for a fulfilling career.

Raboin’s older stepsister, Jill, was born with cerebral palsy, which has left her neurologically limited. As a result, Raboin helped administer her medication and carry out daily tasks.

“Because nurses were continuously coming in and out of my house to take care of Jill, I had the opportunity to get to know many people in the profession and learn what they did,” Raboin said.

Raboin, who works as a nurse in the neurology, neurosurgery and trauma unit at Hartford Hospital, had originally planned to work in pediatrics after graduating from Quinnipiac — during the rise of the COVID-19 pandemic.

“My professors really helped me better understand my strengths, my opportunities and what would make me happy,” Raboin said.

When she was 7 years old, she was first exposed to disabilities through her stepsister. Raboin noted that it was an interesting experience because neither side of her family had really been exposed to any type of disabilities before that.

Although she loved being a caretaker for her stepsister, she never thought that she would pursue neurology as a career.

Despite this, her professors encouraged her to connect with the neurology department at Hartford Hospital, a 938-bed acute care teaching hospital.

“I didn’t even really know what my true ambitions were until some of my professors pushed me out of what I thought was my own comfort zone, but actually turned out to be something that I am extremely, extremely comfortable with and love every single day,” Raboin said.

Even though it wasn’t what she initially expected to pursue, Raboin was pleasantly surprised when she discovered her love for neurology.

“If I didn’t put myself out there, I don’t think I would be able to unlock that ambition as well as I did,” Raboin said. “It really is what you make of it.”

“She is deeply passionate about caring for others, and that shows in everything she does,” Sabato said. “She asked for suggestions about how to implement her new knowledge and skills on campus — she wanted to learn more about interprofessional education — sought out opportunities to engage with students outside of her discipline because she knew that would make her a better nurse.”

Raboin urges current students to accept that they might not know exactly what they want to do after they graduate.

“I don’t think I knew what my dream was when I started college,” she said. “I ended up fully embracing it, exploring different things that I could do and try to be able to find my dreams through the opportunities that Quinnipiac provided, not only through all the nursing institutions but also through those global solidarity trips as well as being an RA. I really did like those educational roles, those leadership roles which I can also apply to my nursing career.”