Panhellenic Council raises more than $40,000 for project in Southeastern Africa 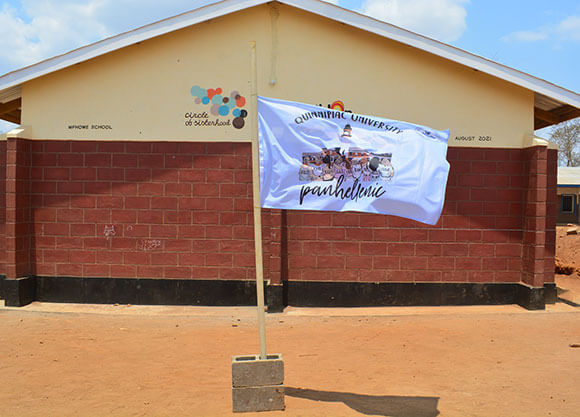 The Quinnipiac Panhellenic Council and the Circle of Sisterhood Foundation partnered with buildON, a movement powered by people from all walks of life committed to ending poverty through service and education, to build the new school in Malawi

Avery Moses, assistant director of campus life for fraternity and sorority life at Quinnipiac, said the university joined with the Circle of Sisterhood Foundation to raise over $40,000 for the project in Mphowe, Malawi. Groundbreaking for the school began in June and was completed last month.

"The Quinnipiac Panhellenic community continues to impress me with their dedication to philanthropic causes,” Moses said. “Watching the women in our community support future generations of women, in other parts of the world, is truly empowering. Even during a global pandemic, this community emphasized the importance of giving back. I have loved watching their passion project come to life."

Quinnipiac Panhellenic and the Circle of Sisterhood Foundation partnered with buildON, a movement powered by passionate people from all walks of life who are committed to ending poverty through service and education, to build the school.

Emily Funk a, senior management major, serves as vice president of finance and fundraising for the Panhellenic Council.

“There are truly no words to describe how much the school build means to me,” said Funk. “I mean, building a school? Who would've thought that was an opportunity that sorority life could bring me? The school is going to change the lives of so many children now and in years to come.”

"Before our relationship with buildON, as parents we were very afraid to send our children, and particularly our young daughters, to school because it was not safe,” said Henry Kammawa, a parent of a student at Mphowe Primary School.

The organization buildON has established four new school blocks since 2017. The collaboration between Quinnipiac and Mphowe Primary School marks the fifth school built in the community.

“This school block is one of the most important because the last group of students has finally moved from learning under a temporary shelter to learning in a real classroom,” according to buildON. “Now, 100 percent of the student population is learning in proper classrooms.”