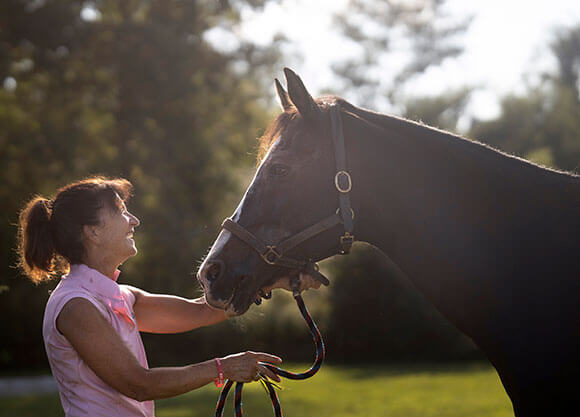 Professor of Occupational Therapy Donna Latella has always been an animal person. But in the beginning of her career, it was not her main focus. One day while working as an OT in a nursing home, she came across a therapy dog and it all just clicked. At that moment she realized her specialty should be in Animal-Assisted Therapy (AAT).

“It’s like one of those moments that sort of punches you in the gut. After that, I realized this is my thing,” Latella said.

Animal-assisted therapy is a form of rehabilitation that incorporates animal interactions with patients in treatment sessions within an OT professional’s scope of practice. According to Latella, people often respond more favorably to occupational therapy sessions that include animals because of the emotional connections we share with animals —The Human-Animal Bond.

At first, Latella focused on developing her specialty with dogs. With each new dog, she would see if they had the appropriate temperament to work as an animal assist and pursue certification. Once her daughter started taking horseback riding lessons, Latella added equine therapy to her work. Equine therapy uses the connection between people and horses to strengthen emotional or physical healing.

As a professor of occupational therapy, Latella said she has been trying to infuse her specialty into her class curriculum. She learned through her doctoral dissertation that there is a high interest in this specialty but a limited academic curriculum focused on the topic.

“OT students involved in AAT horse and dog programs include junior service-learning students, graduate students who hope to do an elective entitled Human-Animal Interactions and graduate students completing a capstone research project,” Latella said. “We try to infuse animal-assisted therapy in the curriculum where we can but also in community programs.”

Latella said she is inspired by the number of OT students who are interested to participate in the AAT programs and classes.

“I get excited that they’re so interested. Part of it is that for some individuals, animals can be very motivating. It can also be motivating to learn about a different type of OT,” Latella said. “Whether it’s the connection with the animal or maybe they miss their dog at home, there are many different reasons why students may want to participate in this specialty practice."

Latella said her therapy dogs also make their way to many of the other programs on campus.

As a professor, Latella said her favorite part about teaching at Quinnipiac is including her students in everything she does.