The family who gave Quinnipiac the Heroes Hat ... and so much more 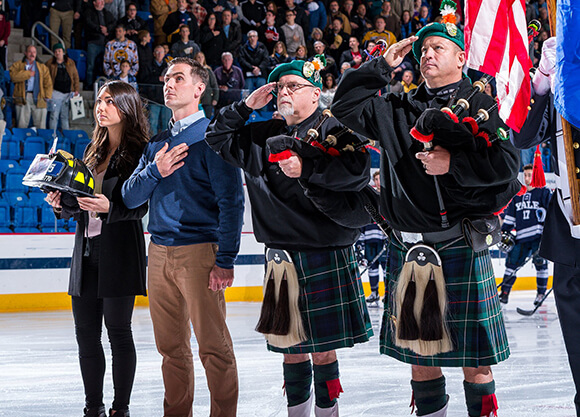 The university knows Joseph Mascali’s helmet as the prized trophy in one of the most spirited rivalry games in college hockey — but to three alumni, it will always honor their dad.

A tested New York City firefighter with Rescue 5 in the Concord section of Staten Island, Mascali went through every scenario. Again and again. The same questions kept him awake during one particular 24-hour shift.

“There weren’t too many Yankee fans, so my father was worried I was going to watch the game alone,” Jen Mascali ’02 said this week. “He drove up just to watch the World Series with me and then drove back home that night.”

Together, they sat in hot pink inflatable chairs in Jen’s room in Commons and watched the World Series on a little TV. It was hardly the Bronx.

It was way better.

Three years later, Joe Mascali was gone, a fallen hero whose memory is palpable, even 20 years after the 9/11 attacks. Some things never change about that day. Mascali’s love for his family is one of them.

He and his wife, Lori, built a life together, a precious gift for Jen and the younger siblings who followed her to Quinnipiac: Chris Mascali ’05 and Katie Mascali ’14, DPT ’17. 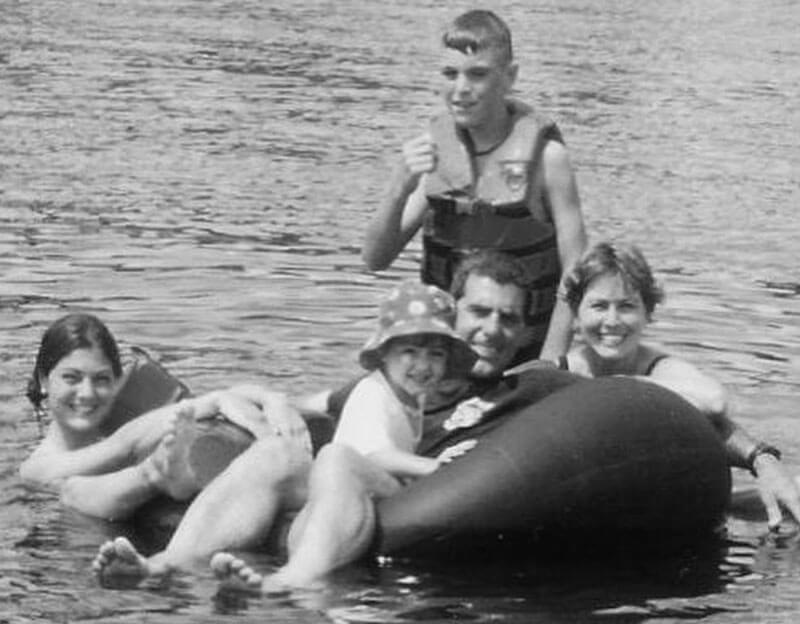 Joe Mascali with his family at Lake George, enjoying the little things in life.

In all, the FDNY lost 343 firefighters on 9/11, a huge hole in the heart of New York’s Bravest. Rescue 5 was hit particularly hard. The Blue Thunder, as the Rescue 5 patch denotes, lost 11 firefighters that day, including 44-year-old Joe Mascali.

“The last time that I saw my dad was at drop-off day freshman year,” Chris Mascali said. “I remember walking up the ridge to Commons and turning around and waving goodbye to my parents. I never thought two weeks later, our world would be flipped upside down.

“But in the time I was there beforehand, I made some friends that I’m still friends with to this day,” Mascali said. “The school just became such a large part of our lives. We were meant to be there. Jen and I were meant to be together. She was a senior when I was a freshman. We drove home together on the 11th.”

Today, Chris and his wife, Lindsay (Shepperd) Mascali ’03, have a young family of their own with 1-year-old Olivia and 4-year-old Joey, named after his grandfather, the hero. In 2013, Chris joined the fire service like his dad. It was only a matter of time, he figures. Chris works out of Ladder 157 in the Flatbush section of Brooklyn.

“It was a hard decision for myself and my family. Obviously, we know the risks involved,” Mascali said. “For me, it’s my connection to my dad. Early on in my career, hearing stories about him gave me insight into the world he lived outside of our home. It’s helped me walk in his shoes a little better. I strive each and every day to live up to the man that he was.”

Katie, the youngest of the Mascali children, is a physical therapist at NYU Langone Health in New York City. She was 8 years old when her father died, but she'll always treasure breakfast at the firehouse and daily rides to school on a firetruck.

It was no different the day Joe Mascali was lost. The easy smile, the dad DNA, he had a way of making his kids feel special.

“He was a firefighter and he was very proud to do that job, but the most important thing was his family,” said Katie Mascali, who befriended Yankees icon Derek Jeter in the years after her father’s death. “We value our family, and we put that above all else. We always have. We know how life can change in a second.”

Not long after 9/11, Quinnipiac established the Heroes Hat hockey game to honor Joe Mascali and those lost in the terror attacks. The wonderful sentiment began with a rivalry game against UConn. These days, QU and Yale play for the privileged trophy, a replica of Mascali's helmet. The next Heroes Hat game will be played January 8, 2022, at the Frank Perrotti Jr. Arena in the People’s United Center.

On Saturday, the heartache of 9/11 will return for the Mascali family. The day always hurts, but the memories — the Yankee games, the summer trips to Lake George, the Disney vacations, the parents who loved their kids more than the world — are healing and hopeful.

The Yankees play the Mets that day at Citi Field. Rest assured, Jen Mascali won’t have any problem finding someone to cheer with, even without those hot pink inflatable chairs from Commons.