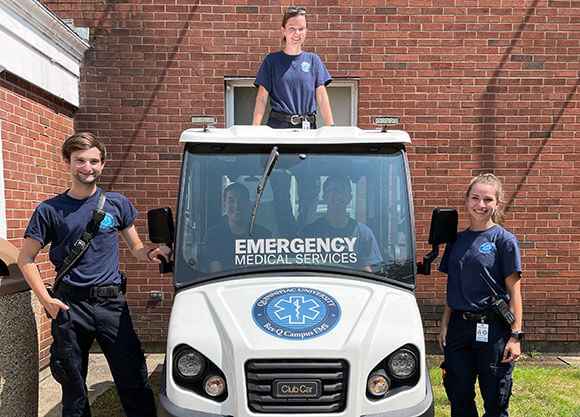 Members of the Quinnipiac University EMS team reflect on the 9/11 terror attacks and how it impacts them as first responders.

As a younger first responder, I have no memory of September 11th, 2001, personally. Despite this, and the fact I didn’t experience the trauma of that day on my own, indirect memories of 9/11 given to me by patients, trainers, and community become embedded themselves in every facet of my identity as an EMT.

Stories, videos, diagrams, and photographs of the tragedy have not only taught me the extent of traumas I might face as a first responder, but have helped me comprehend the importance of MCI preparedness both tactically and socially. Knowledge of 9/11 has not only enhanced my skillful preparation for large-scale events, but enhanced how I prioritize compassion and teamwork in the care I provide. I see it as a personal responsibility, an honor, to follow the example of the EMS teams that served on 9/11. I am eternally grateful for my teammates that provided selfless service on that day 20 years ago, along with the role models they have become for first responders nationally in the years since then.

As a first responder, 9/11 has demonstrated to me the impact that being in this job can have. It has shown me the courage that my co-workers display, along with showing the world what this profession is really about. I look up to all of the first responders at Ground Zero, who risked their lives for the city they loved. We will never forget all of the people who lost their lives as a result of the September 11, 2001 terrorist attacks, but we should always be reminded of the kindness and strength that followed this tragedy.

As a first responder reflecting on 9/11 and an individual who was personally impacted, I am humbled by and aspire to have the courage of those who responded on that day. They demonstrated what it truly means to be a first responder in the face of terror and tragedy.

9/11 was a difficult time for the United States, especially first responders who so urgently responded to help our nation in a time of crisis. I remember one thing that has always amazed me was seeing all the different fire, police, and EMS responders come to help from all over the nation.

Though it may have been years ago, it is never forgotten as it shows a time in our nation that everyone truly came together more than ever. As a first responder myself, it has always stayed with me the thought and remembrance of my fellow brother and sister first responders that gave the ultimate sacrifice and gave their lives to save so many innocent people. That is the true definition of a first responder and a hero to me.

9/11 was a national tragedy that took the lives of hundreds of first responders and affected their families and agencies. As a newly trained first responder, this catastrophe looms over me as a harrowing reminder of the events I could see. Their sacrifice is an inspiration to me to continue my training and do my best to care for patients, while also considering my own safety. I hope to one day achieve a level of knowledge and skill to be prepared for a situation like this, but I also hope this day never comes.

9/11 was an extremely devastating event that sent complete shock waves through the country; many of the people who risked their lives and responded to 9/11 were first responders such as EMS, fire and police personnel. Their dedication to others and that of our servicemen and women and first responders throughout the country and internationally is inspiring. I trained to become a first responder as an EMT with the hope that I have half the courage and strength that those men and women exhibited on 9/11.

Growing up, I always felt emotional about 9/11 and had much respect for both the victims and responders who risked their lives to save so many. Now that I am a first responder, my respect and admiration has only increased and I am honored to be part of a community classified as heroes. Each shift is a reminder of their sacrifice and I will continue to serve in their honor.

Being a first responder in a post-9/11 world has added a weight to the job as whole. Not only do we have a continued responsibility to protect others, which we are honored to do, but there is a sense of acceptance that you could be in real danger. It takes a certain level of selflessness to commit to a position that has potential to jeopardize your own safety. It makes the work so much more meaningful.