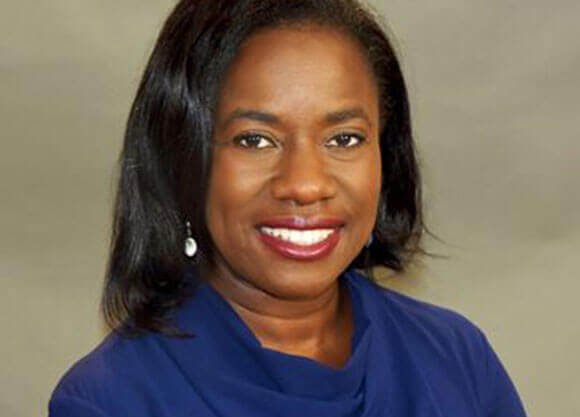 In its 32nd year, the Thurgood Marshall Award is given in honor of the first African American to be appointed to the U.S. Supreme Court. Marshall epitomized individual commitment, in word and action, to civil rights. Each year, BLSA recognizes an outstanding person in law, education or politics who exemplifies Marshall's dedication to improving society through the advancement of civil rights, civil liberties and human rights.

“The aim and purpose of this ceremony is to recognize outstanding people in the fields of law, education or politics who exemplify Thurgood Marshall’s dedication to improving society through the advancement of civil rights, civil liberties and human rights,” said Camille Lavache, a third-year law student and BLSA president. “In selecting attorney Moses and Dr. Sawyer as our awards recipients, we have more than exceeded our goal.”

Moses thanked her family, friends, mentors, mentees, partners and “all who have made it possible for me to have contributed in my very small part to the fight for civil rights, justice and equality for all under the law.”

“It would be more accurate for me to say, ‘We accept this award for the work and difference that we have been able to make in order to bend the arc of the moral universe closer and closer toward justice,’” she continued. “We still have a long way to go in the struggle. This past year has made that patently clear, but we are excited about the future because we see history moving in the right direction.”

In addition to her role as assistant U.S. attorney, Moses is the civil rights coordinator for the Civil Division at the U.S. States Attorney's Office in New Haven. She is the chair of the Judicial Selection Commission, the past treasurer of the Connecticut Bar Association, and past president of the George W. Crawford Black Bar Association.

Moses is a board member of the Connecticut Women’s Education and Legal Fund, as well as the Connecticut Appleseed Foundation, where she chairs the Homeless Experience Legal Protection Project.

She is the 2005 recipient of the Joseph F. Noonan Award for Outstanding Legal Scholarship and Commitment to Public Service and received a 2005 proclamation from Gov. M. Jodi Rell recognizing her dedication to public service and naming May 22, 2005, Ndidi Moses Day in Connecticut.

Like Moses, Sawyer had a long list of people to thank. He said he was humbled by the award and promised “to work to make the world a better place through research-driven social change.”

Sawyer ended his speech with a quote from Justice Marshall: “Where you see wrong or inequality or injustice, speak out, because this is your country. This is your democracy. Make it. Protect it. Pass it on.”

At Quinnipiac, Sawyer is responsible for leading efforts to advance diversity, equity and inclusion initiatives to support the university’s strategic plan. A member of the Quinnipiac community since 2012, he has more than 20 years of higher education experience. Sawyer is a certified diversity trainer and conflict mediator who has held positions in residential life, admissions, multicultural affairs, fraternity and sorority affairs, student activities, experiential learning, student leadership and STEM retention.