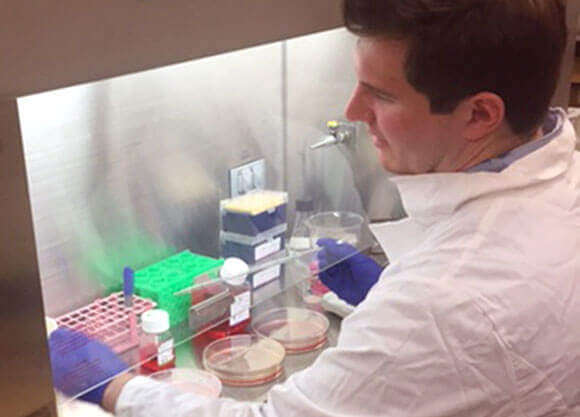 Andrew Harrison MS ’18 is preparing to earn his master’s in biomedical sciences with increased confidence in his ability to succeed as a scientist.

Quinnipiac and, more specifically, the MBS program offered a comprehensive microbiology tract that other universities I was interested in lacked,” the Maryland native said. “Within the microbiology concentration, the core classes were aligned with my career interests as an infectious disease expert. The open electives in the program enabled me to tailor my interests accordingly.

In addition to the strong reputation of the program, Harrison’s significant research in Lyme disease had led him to read many publications by Christian Eggers, an associate professor in the program.

“His work inspired me to undertake a thesis in his lab and facilitate my prior research experience for post-graduate opportunities,” Harrison said.

During his time at Quinnipiac, he was able to work extensively with Eggers — both as part of a pathogenic microbiology course as well as through his thesis work.

Working on his thesis under the supervision of Eggers increased his confidence in the laboratory and refined his critical thinking skills as a scientist. It also improved his ability to work independently, enabling him to design several experiments that he plans to translate to future PhD research.

He attributes his acceptance into a competitive PhD program to his work at Quinnipiac.

“Without this experience, my CV credentials would not have appeared nearly as strong as they needed to be in order for PhD consideration,” he said. “I have done several experiments that I will be able to translate to PhD research.”

Although he didn’t know anyone when he arrived to the program, he is leaving with several strong relationships.