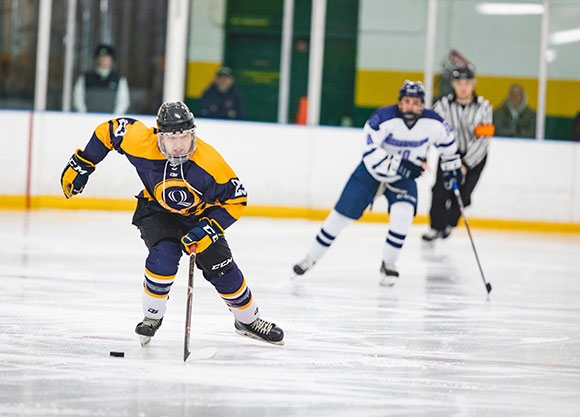 The Quinnipiac club hockey program’s success has been gaining traction since launching in Spring 2019.

The team currently stands at 13-2 this season, having defeated No. 3 Farmingdale State, No. 5 Fairfield, No. 6 Ramapo and No. 10 Delaware.

Mike Medina, director of campus life for recreation at Quinnipiac, said the 32 members of the team represent some of the best to compete anywhere in club sports hockey.

“I’m very proud of the success of our club hockey program for achieving the #1 ranking in the College Hockey Federation,” he said. “Having it coincide with success at the men’s and women’s varsity level clearly demonstrates the passion and commitment of Quinnipiac as the center of collegiate hockey success.”

The team’s success elevates the university, as well, Medina said.

“This success creates more buzz for the university and will help in recruiting new students to Quinnipiac who wouldn't be able to play Varsity D-1 athletics, he said.

Justin LaSella ’23, club hockey president and student in the entry-level physician assistant program, has been playing hockey since he was 5 and has been a part of the Quinnipiac club team since he was a first-year student.

He said that hockey has helped him succeed academically by improving his time-management skills and providing leadership opportunities. It also has forced him to think critically and work under pressure, he said.

“Club hockey found its way to the No. 1 spot by building a cohesive team that trusts each other and comes to the rink ready to work every day,” LaSella said. “It’s awesome seeing us ranked with the top 10 men’s and women’s ice hockey teams. It really shows that Quinnipiac is a hockey school and that our relatively small university can not only compete with but defeat those of larger student populations.”

LaSella said he’s looking forward to the rest of the season.

“Earning No. 1 spot means a lot for the future of the club program because it will influence more students to come here that are interested in playing,” he said. “I think it will give us opportunities to expand our program and make it as competitive as possible. Every player on this team believes in our goal to win a national championship. The second semester is filled with a lot of great matchups and post-season tournaments, so we’re excited to get back out there and show what we can do.”