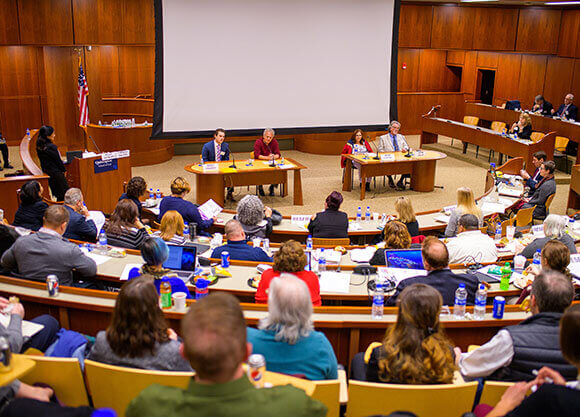 Experts in law, medicine, public policy, social services, politics, education, nursing, law enforcement, emergency medical services, treatment options and other fields from across the state came together at our School of Law to seek information and answers to the opioid crisis in Connecticut.

Jaclyn Lucibello, a former opioid addict, jumped right into the deep end of the darkness.

“Here I am, a convicted felon, and the choices of my past continue to live with me,” Lucibello told those attending a recent forum, “Building Bridges and Finding Answers: The Opioid Crisis in Connecticut.”

Lucibello was in graduate school and working as a social worker with a bright future. The picture changed after filling several prescriptions for Percocet to relieve post-surgical pain and she was hooked. But when the scripts stopped, the arrests began on charges of larceny and other crimes to pay for her drug habit.

“Eventually, I could no longer get the prescription drugs, so what did I do? I turned to heroin. Nobody in their right mind is going to stay dope sick for more than a day or two,” said Lucibello, who spent three years in state prison and gave birth to a son while shackled to a hospital bed.

Jaclyn Lucibello told her story of addiction and recovery at the summit in hopes of shining a light on the impact of the crisis on individuals and families.

Although Lucibello’s remarks were raw and sometimes difficult to listen to, she was one of the lucky ones. Last year, there were 1,038 accidental drug deaths in Connecticut, most of them from opioids, according to the Office of the Chief Medical Examiner.

In response to the opioid epidemic, Quinnipiac partnered with the Connecticut Bar Association and the Connecticut Bar Foundation to plan the November 9 forum. The schools of law, medicine, health sciences, nursing and education were all instrumental to the event.

The conversation continues throughout the year as part of a university-wide Campus Cross-Talk discussion on the opioid crisis. Information about the events will be posted at facebook.com/quinnipiacuniversity and on signage across the university.

“Twenty-first century problems are too complicated to be solved by a single discipline,” School of Law Dean Jennifer Gerarda Brown said in her opening remarks, “and I can think of no problem for which this is more true than the one we will consider today: the opioid crisis.”

Connecticut Gov. Dannel P. Malloy said the public needs to de-stigmatize addiction and see it as a disease, rather than a personal failing.

After listening to speakers in the morning session, attendees spent the second half of the summit working in one of ten breakout groups. Each group set plans to meet over the next several months and report back at a follow-up forum at Quinnipiac in June 2019 to share ideas, findings and strategies.

Connecticut Gov. Dannel P. Malloy echoed Brown’s sentiments. “As a society, we are evolving quickly, but not quickly enough to understand that this is not a personal failing,” Malloy said. “Addiction is a disease.”

The Honorable Anne C. Dranginis, a retired judge of the Connecticut Appellate Court who practices law with the Bridgeport firm of Pullman & Comley, LLC, spoke to those in attendance via a recorded message about her daughter’s battle with opioid addiction.

“My Charlotte died on June 29 this year of an overdose. She was in Florida,” Dranginis said. “It happened after 12 years of a struggle with addiction. It happened in a way that broke my heart like it breaks all parents’ hearts."

“No one is immune, and that is why I have chosen to be very public about my loss,” Dranginis added. “So many young people feel the shame of addiction when we should just be enveloping them with love, treatment, prevention and education.”
Joel Cartner, a third-year Quinnipiac law student from North Carolina, takes opioids to help relieve the pain and symptoms of cerebral palsy spastic diplegia, a condition that causes his muscles, especially those in his legs, to contract almost constantly.

“My first experience with opioids, I was 9 years old,” Cartner said. “I was having what’s called a muscle release surgery. They take the muscles — they cut them away from the bone — and they stretch them the length they’re supposed to be, and then they reattach them. The baseline of pain is indescribably awful.”

In 2011, Cartner had another surgery to address scar tissue buildup that had increased his chronic pain. This meant a longer, more closely monitored opioid regimen. But even with proper medical supervision, he said, the threat of abuse is urgent and real.

For Cartner, voices like his are critical to examining the opioid crisis from every available lens.

“The current state response has been really focused on how to prevent deaths. And that’s admirable and great and absolutely necessary,” Cartner said.