Exploring the power of anti-racism, a practice for change 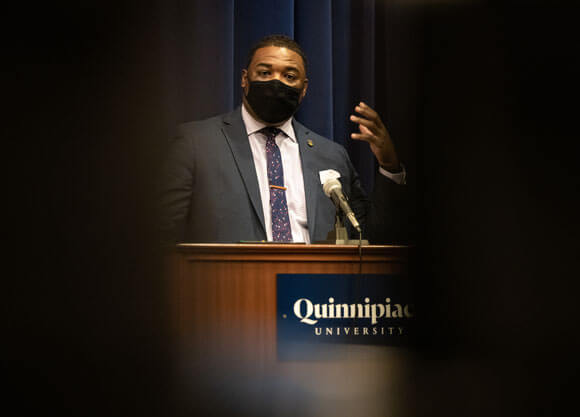 Generating an inclusive atmosphere at Quinnipiac is an effort that demands active participation by all, and it begins with finding a mutual, respectful language around conflict and progress.

The Department of Cultural and Global Engagement (DCGE) created an Inclusive Conversation series to aid this purpose. The first Zoom event, Anti-Racism on Campus, was attended by faculty, staff and students. Associate Director for Multicultural Education ​Veronica Jacobs helped to organize the event, and Director for Multicultural Education and Training Daymyen Layne was the moderator.

Layne began the two-hour Zoom by discussing the definition and work of anti-racism. Specifically, Layne explained how it applies to fostering a “brave” space (evolving past the notion of a safe space, a brave space is an environment where experimentation and growth are encouraged).

“People have incorrect ideologies and are confused about what anti-racism is, as it’s been sensationalized,” said Layne. “We need to break this down and dig into what it means for us and for our campus, and how we can utilize anti-racism to be more inclusive in our practices, no matter what role we come from.”

Non-racism and anti-racism are not interchangeable ideas, Layne said. Rather, anti-racism is the daily practice of promoting inclusion and equality by recognizing and actively working to dispel systemic, social and structural systems that promote an unequal society, he said.

Utilizing “I” statements, listening more than speaking and truthful self-examination of biases and concepts are all useful tools, he advised.

“It’s important to think about intent versus impact,” said event participant and Director of International Student Services Sarah Driscoll. “Intentions of what you’re saying and the impact that it may cause for those listening to it.”

Definitions of racism, discrimination and bias framed a reflection of current prejudice in the United States, she said.

“There is redlining, hiring discrimination, voting rights discrimination, unequal lending, police brutality and over policing,” said Layne. “These started at the end of slavery, and we saw how they were highlighted by the death of George Floyd, in the resurgence of the Black Lives Matter and defund the police movements.”

These and other circumstances continue to result in marginalized group dynamics, as minorities remain systemically disadvantaged, Layne said. This limits access to resources, and ultimately instills internalized oppression for members of Black and Brown communities, he said.

Breakout groups allowed for more anecdotal dialogue between event attendees, as they were encouraged to share their introduction to the concept of anti-racism and how this initial understanding evolved, specifically over the last five years.

Short video clips were shown to demonstrate the power of the Black Lives Matter movement in a pandemic world and explore how microaggressions work against the evolution of an inclusive and equitable society.

Before the event’s conclusion, Layne extolled self-reflection and was the catalyst for difficult conversations as ways to practice anti-racism.

“After doing some soul searching about where you [interact] with racism in America, do your due diligence to figure out why things are unequal; what voices are missing, on committees and leadership counsels, at work,” he said. “Representation matters. To work to change policy and procedure, we have to tear it all down to rebuild it.”