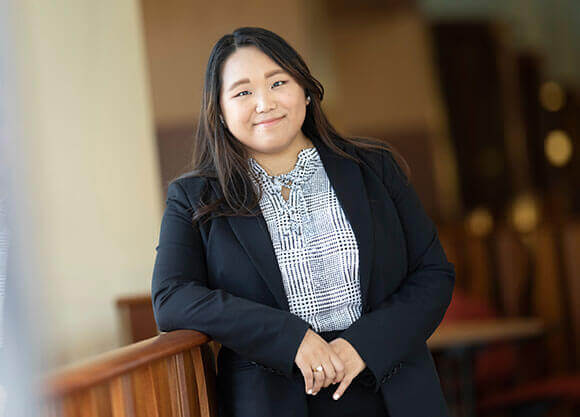 When Eleni Choephel, JD ’20, thinks about the $1.5 trillion of student loan debt in America, she shakes her head.

With some repayment plans extending 30 years or more, it’s like having a mortgage — without the house.

“Just the sheer thought of how much I have to pay, and how much debt my peers have racked up, it’s always on my mind,” said Choephel, who served as president of Quinnipiac’s chapter of the Asian Pacific American Law Student Association last year.

Undaunted, Choephel studied the issue and wrote a paper last spring titled, “The Student Loan Discharge Crisis: How We Got Here and Where Do We Go?”

She entered the paper in a national contest sponsored by the American Bankruptcy Institute (ABI) and won second place and a $1,250 prize.

“There are so many people borrowing money to go to school, so when you look at the history of student loans, it hits even harder,” Choephel said.

Instead of five years to pay back $10,000 in the 1980s, today’s borrowers can owe $100,000 or more with repayment plans lasting decades unless some of the principal is discharged in court.

Choephel credits Robert White, a distinguished practitioner in residence, for encouraging her to enter the ABI contest. She took a bankruptcy course and a corporate transactional workshop with White last spring.

“Sometimes, when you don’t see the worth in yourself, he’ll push you to a better understanding of yourself and your work,” Choephel said.

After taking the Connecticut bar exam this fall, Choephel will work as an associate at Pastore & Dailey LLC, a financial services law firm based in Stamford, Connecticut.