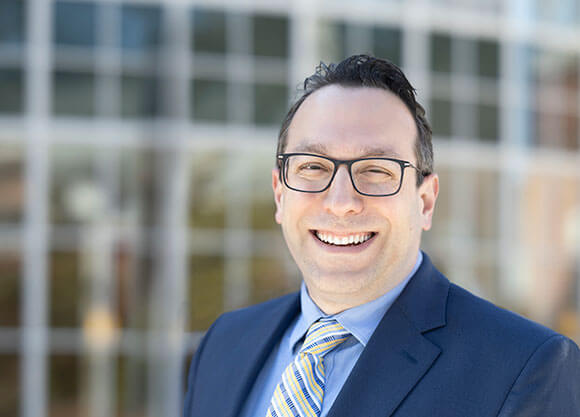 Mike Medina worked diligently for nearly a decade to lay the groundwork for what has proven to be a successful club sports program at Quinnipiac – to the cheers of countless students.

Medina, director of campus life for recreation, has developed a robust recreation program over the past 17 years — transforming intramurals and club sports into two of the most beloved aspects of student life at the university. For his tireless efforts, Quinnipiac is honoring him with its most prestigious staff recognition, the Center for Excellence in Service to Students award.

“He goes the extra mile to meet with you and other faculty to spread our ideas and advocate for us,” said Gianna Brusca ’20, DPT ’23. “The expansion of club sports was not an easy task and Mike handled it with professionalism and eagerness to provide opportunities to athletes on more than a dozen teams.”

Bringing club sports to Quinnipiac was the realization of a dream that Medina led in collaboration with the Student Government Association as well as various student-run clubs and organizations across the university.

“It’s really been a culmination of so much hard work — not only by me — but really by students throughout the university,” Medina said. “One of the best things we’ve seen is that the student interest continues to grow, we already have 400 students who are interested in trying out to be part of a club team and we expect that number to increase probably by at least another 200 in the next couple weeks.”

In fact, nearly 6 percent of the entire undergraduate student body is now part of a club sport team — and interest continues to rise. Since the program’s inception, 22 teams have been established, several vying for post-season play.

Many describe Medina as a passionate leader, who leads students through his own example, demonstrating that they can accomplish more than they ever could imagine. Treating them with mutual respect, Medina makes students feel included in all decisions regarding the club sports program.

“During the summer, I helped Mike interview candidates vying to be his assistant for the program,” said Judy Chicoine “20. “Mike wanted candidates to be interviewed by students because he valued their perspectives.”

Throughout his nominations for the Service to Students award, students agree that he embodies many traits that make him a valued member of the Quinnipiac community, serving students tirelessly every single day.

“I started the club golf team this year and Mike came up and welcomed me and told me how excited he was to work together,” said Ben Lowenfels ’23. “He really went out of his way to make me feel supported.”

Medina said he is humbled to be nominated for the award by students and selected by his peers.

“Our department creates memories, experiences and friendships that last well beyond the time at Quinnipiac,” said Medina. “I can’t even tell you the number of alumni that reached out to me over the last 24 hours because of this award. That just means so much. Those connections that we have helped students build has been probably the most rewarding aspect of my job.”