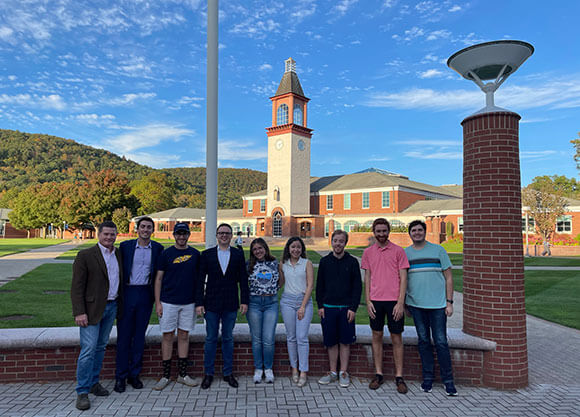 Language defines a culture, and visiting lecturer Dr. Balázs Tárnok is passionate about preserving the culture of national minorities in Central Europe.

Tarnok, a Hungarian jurist born and raised in South Slovakia, is currently a visiting research fellow at the Kellogg Institute for International Studies at the University of Notre Dame. His fellowship focused on gathering research on the current environment and opportunities for Hungarian human rights advocacy stateside.

Since beginning his legal studies in Budapest, Tarnok felt it was his duty to take part in the service of his home community, he said.

As history continually demonstrates, country and territorial borders are malleable dotted lines, he explained. In Ukraine, there are about 150,000 ethnic Hungarians living in the region of Transcarpathia, located along the country’s western border. Other national minorities dwelling in Ukraine include Russians, Belarusians, Bulgarians, Romanians, Greeks and Poles.

Preserving the rights of these minorities became paramount in 2017, when a Ukrainian law drastically restricted the use of minority languages in public schools, explained Tarnok. From an American point of view, this may seem somewhat logical, but Tarnok feels differently.

“Minorites are not refusing to learn the state language; they want to be able to use their own language in their own homeland,” he said.

Tarnok’s advocacy work for ethnic minorities in the European Union can be applied to similar groups in the United States. During a visit to Connecticut during Indigenous People Week, Tarnok met with leaders from the Mohegan and Mashantucket Pequot tribes.

“We talked about how different minority groups could promote themselves in the United States so policymakers can become aware of the larger areas of improvement needed,” said Tarnok. “Like national minorities in Central Europe, these groups want to help their communities while acting as good citizens of their country.”

Tarnok discussed this and the larger geopolitical situation around Ukraine, Russia and Hungary during an October 12 lecture on campus. He referenced his four great grandfathers as examples of the fluctuating nationality identity phenomenon: Over their lifetimes, the ruling country of their native village, Iža, changed five times due to shifting borders.

“The most important challenge for us is to preserve language and preserve identity,” said Tarnok.

Tarnok adds that there is no simple solution to this crisis, but shares steps towards a larger goal of inclusion, such as posting bilingual street signs in minority territories.