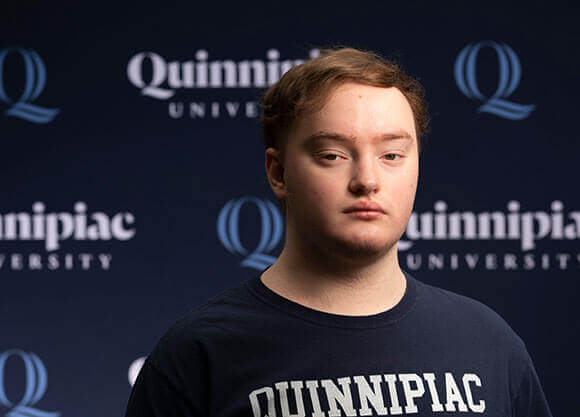 Jonathan Mason, a first-year member of Quinnipiac’s eSports team, has been recognized for his talents and passion by being named the MAAC MVP.

Mason found his niche within the eSports community at Quinnipiac — and quickly became invested in it. His efforts quickly paid dividends, including:

“I’ve had to work extra hard to be able to put time into this,” said Mason. “I remember in high school that I’d rush home to get my homework done just so I could go to a local tournament later that day.”

He said his participation in eSports has taught him how to better manage his time, as he has had to manage his schoolwork with his tournament preparation. Mason said he prefers single-person fighting games, because of their personalization settings.

“I remember going to my first local tournament for Smash in April 2018,” he said. “After paying attention to the scene since the year previous and a new game in the series being announced, I wanted to see if I would enjoy it. I loved it and have been playing that ever since.”

The Quinnipiac eSports team has made amazing strides in its first season of competition.

“Quinnipiac was helpful toward the beginning of our season when we were having technical difficulties,” he said. “They also helped in terms of having the latest DLC characters available on our main console.”

"We're very proud of Jonathan for his performance this season. He's had an outstanding season and this is a well-deserved recognition by the MAAC for his performance all year," said Mike Medina, director of campus life for recreation. "Jonathan performed extremely well under the pressure of must-win matches all season, including an overtime win vs. Canisius and a come-from-behind win against Marist."

He said he looks forward to watching the team compete for a national championship, beginning April 17.

Mason sees a bright future for eSports, in part because of their high amount of inclusivity.

“Personally, I was born with a skin condition that makes it difficult to regulate my body temperature,” he said. “Doing athletics was something that I had a hard time with, and it eventually got so frustrating that I gave up. With eSports, however, I don’t have to worry about that much at all. I’m able to use my brain to win rather than my physical abilities, which allows me to get out the competitive urge that I didn’t realize I had.”