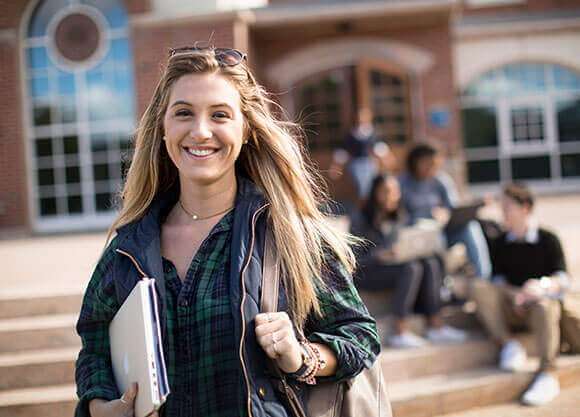 Rachel Fisher '19 used the nursing skills she learned in the classroom to save a man's life while traveling between campuses.

Rachel Fisher, ’19, always knew what she wanted to do with her life — be a nurse. What she didn’t know was how soon the knowledge she was acquiring at Quinnipiac would be put to the test outside of the classroom.

One Thursday afternoon, having just finished an on-campus clinical experience about how to care for someone having a seizure, the Pennsylvania native was driving to a meeting with her adviser when she spotted an emergency situation.

“I saw a man lying on the side of the road, completely cyanotic and with visible head trauma,” she recalled. Still in her scrubs from her clinical, and with an extra pair of medical gloves in her pocket, she quickly parked her car and jumped into action.

From the information that people in the area were able to provide, Fisher, who is minoring in global public health, quickly determined that the man had most likely had a seizure before collapsing on the pavement and suffering head trauma.

“I did a quick neuro-assessment and felt to see if he had a pulse, and found there was none,” said Fisher.

With the knowledge from her clinical experience still fresh in her mind, she instructed those around her to call 911 and assist her in improvising seizure pads ­– soft objects to be placed next to the patient to prevent injury should another seizure occur – while she focused on getting the man breathing.

“I performed CPR for about 2 minutes before the man began to breathe again and regained consciousness,” she said. At that point, the emergency response team had arrived and rushed the man off to an area hospital.

Afterward, the police told Fisher that her quick actions had saved the man’s life.

As a nursing student, she is used to being told she’s going to save lives in her chosen profession, however, this time it was different.

“The impact of those words never really hit me until that day,” she said.

Fisher was originally drawn to Quinnipiac’s highly rated nursing program because of the advanced technological and practical resources she saw offered to students. She credits her hands-on nursing experiences gained from those resources with preparing her for success in the world outside of the classroom.

“Without Quinnipiac, I’m not sure I would have been able to save that man’s life,” she said. "The course-load we have has challenged me as a student in ways I never thought possible. I've learned how to better prioritize my time and have learned a number of skills that are already helping me to become a great nurse."