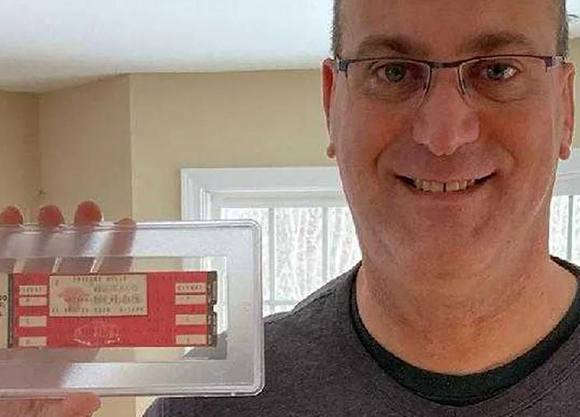 One Quinnipiac administrator’s memory was worth more than its weight in gold.

Then, a young college student in the outskirts of Chicago, Michael Cole found himself with a pair of tickets to a Chicago Bulls-Washington Bullets game. He saved an unused, full ticket from the game with his collection of stubs for nearly 34 years within a manilla folder inside of a clear plastic bin labeled simply, “Mike’s Memories.”

“I enjoy keeping mementos from joyful times in my life and sports has always played a big part,” said Cole.

A few weeks ago, Cole, now the director of admissions for operations in the Frank H. Netter MD School of Medicine and a long-time Quinnipiac men’s ice hockey season ticket holder, learned that a ticket stub from that very game — Michael Jordan’s debut NBA game in October 1984 — had sold for more than a quarter-million dollars, the most expensive sports ticket ever sold.

It was then his hands began to shake as he remembered the ticket he had so gingerly tossed among his memories decades earlier.

“I’m incredibly excited,” Cole said. “But I am also relieved it’s all over.”

He said he plans to use the money to share experiences with family and friends — as well as replacing his 2012 Kia with a sensible newer used car.