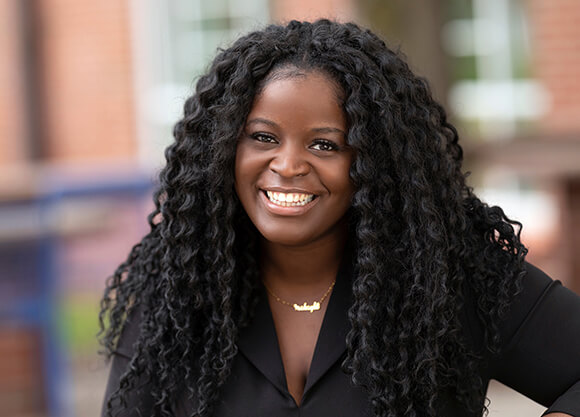 Caurice Wynter, MD `22, was celebrating her mother’s birthday at her family’s Bronx home in March when she received the call. Wynter, a fourth-year student in the Frank H. Netter MD School of Medicine, learned she would not be resuming her surgical rotation at Waterbury Hospital. All of the School of Medicine’s students were pulled from their rotation sites due to the worsening COVID-19 pandemic.

“That went from a theoretical situation to reality really fast,” Wynter recalled.

Not long after New York’s shelter-in-place order took effect, Wynter’s 57-year-old father, an essential worker holding down three jobs, developed a cough. By the time a test confirmed his COVID-19 diagnosis, the illness had spread to Wynter and her mother.

Wynter was left to care for her parents while battling her own symptoms and tending to the needs of her 4-month-old daughter, Makayla, alone. The experience became the subject of her first article published in a national medical journal. It illustrated a grim reality — that the pandemic was taking a disproportionate toll on minority communities, especially in urban settings.

“I was in full survival mode, going between fight and flight that whole time,” recalled Wynter.

As their conditions worsened at home, Wynter took her parents to three different overcrowded and overwhelmed hospitals before they were finally admitted. When she tried to speak with doctors on her parents’ behalf and offer her input, Wynter felt dismissed out of hand.

“There were multiple times when I felt belittled,” she said. “All I could do was take deep breaths and play the cards I was dealt.”

What followed were many sleepless nights spent on her parent’s couch. Wynter couldn’t help thinking about those in similar circumstances in between waves of frustration and anxiety about her family: Those who didn’t have the luxury of working from home and were at increased risk of virus exposure. Those with limited or no access to testing, health care and other resources, and those who were financially ill-equipped to manage such a medical emergency.

For Wynter, those long nights brought many difficult memories to the surface.

“I grew up experiencing these issues, so they weren’t new to me,” said Wynter, “but the situation amplified them by a thousand degrees.”

Wynter’s parents would ultimately recover. However, she felt an obligation to them and countless others to advocate for health equity in her community.

Wynter got her opportunity when a friend reached out and persuaded her to be a guest on “Stories of Our Times,” a podcast produced by the Times of London. The episode, “Voices of New York,” focused on Wynter and eight other New Yorkers and their attempts to cope with the pandemic.

“I tried to spread the most positive message I could out of the most desperate time in my life,” Wynter said.

In late April, after the episode had aired, Wynter showed what she had written for the podcast to Professor Listy Thomas, Director of the Clinical Arts and Sciences course and Assistant Dean of Simulation at the School of Medicine. Thomas saw great potential, though she felt that Wynter was holding back. She encouraged Wynter to revisit it for potential publication — and not spare any details.

“I wanted Caurice to know that these difficult experiences are important to acknowledge and worth the attention of others in our profession, especially during the pandemic,” Thomas said.

Through several revisions and rewrites, Thomas guided Wynter, helping her to polish what would eventually become “Inequities of the COVID‐19 Pandemic Among Minority Populations: My Family’s Struggle to Survive.” In October, the article was published in the journal Academic Emergency Medicine.

“Caurice strived through her illness and caring for her entire family while in a tough medical school curriculum,” said Thomas. “Her commitment and dedication to getting this manuscript published is truly exemplary.”

Among other things, Wynter hopes that it provides current and future School of Medicine students with the three perspectives of care provider, patient and family member.

“What I want is for people to have increased compassion,” Wynter said. “It could be them; it could be their family — no one is immune to something like this.”

While the pandemic disrupted Wynter’s planned graduation date of 2021, she said she will take an enrichment year to complete additional electives and perhaps continue investigating systemic inequities in the health care system.

Before the pandemic, Wynter was considering orthopedic surgery as a specialty. She now plans to pursue emergency medicine after she graduates in 2022.

“I realized the degree to which I could survive and manage crises, and that motivated me to choose this specialty,” she said. “I know my potential and I know what I’m capable of.”