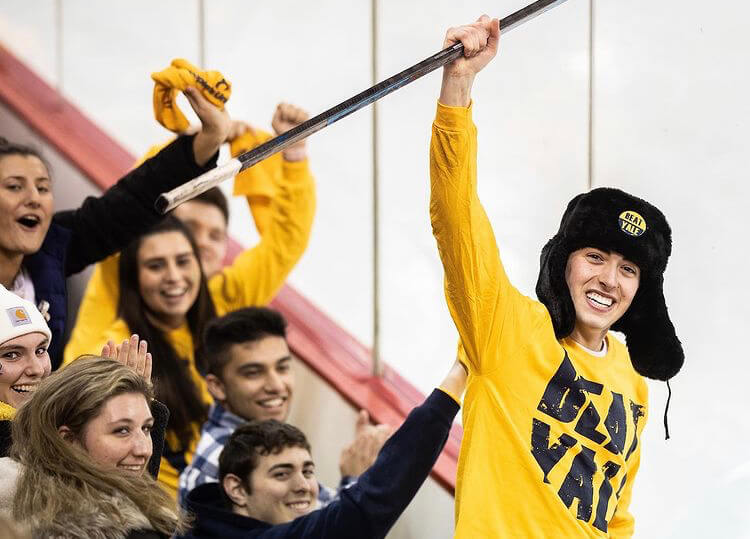 Nick Ciampanelli ‘22, president of the Quinnipiac Student Government Association, has a wide-reaching passion for Quinnipiac — from its students to the more than 130 student-run clubs and organizations.

Ciampanelli, an economics and political science dual-major, as well as an applied statistics and data science and mathematics dual-minor, started his journey with SGA in the fall of his freshmen year when he was elected class senator for his first two years. He went on to be elected as the organization’s secretary his sophomore year and as the vice president for student experience his junior year prior, before ultimately being elected president for the upcoming year.

“I’ve aided in shifting the culture around school spirit and traditions, promoting equity and inclusion through programming, and boosting alumni engagement with current students — all of which have helped in making a meaningful and lasting difference at QU,” he said of what he is most proud.

Ciampanelli attributes much of his decision to attend Quinnipiac to the fantastic academic programs, the beauty of the campuses and the passion students have for the university.

“I vividly recall the first time I visited Quinnipiac and how each student I met had a distinct passion for this community,” he said.

SGA is a great way for students to get involved with the student experience, especially with its role as the liaison between the university administration and the student body, he said.

“This enables us to actively communicate the needs of students with administrators and for our membership to actively work on initiatives to improve the student experience,” Ciampanelli said.

Some of the ways students can be part of SGA are by running for office starting their first year, running in special elections or being informally involved as an unelected member.

Ciampanelli wants students to know that regardless of how they want to be involved, SGA supports them in building relationships with administrators and completing their initiatives to make meaningful changes at Quinnipiac.

He said he is passionate about building new traditions and opportunities to recognize the university’s outgoing senior students.

He said he feels so strongly about making SGA a more inclusive organization that his biggest goal is spearheading an equitable restructure of the organization.

“Although there have been several restructures in the past, each facilitating significant changes to the organization, SGA is historically a predominantly white organization” he said. “These countless necessary additional changes to better represent the student body would further increase the organization’s ability to prioritize diversity, equity, and inclusion initiatives.”

Ciampanelli said his political science major has aided in his work in SGA, giving him the ability to make internal improvements to better serve the Quinnipiac student body.

“The turbulence of modern-day politics reminds me about the importance of accounting for and collaborating with those of differing opinions and perspectives,” he said.

He got his foot in the door focusing on history and advocacy for civil and gender equity while working his sophomore year in the Title IX office at the university thanks to the inspiration of Caitlin Wells, former Title IX Coordinator.

While working in that office, he assisted in formulating awareness programming, overseeing data analysis and working towards gender-inclusive housing.

“Although the most common thing you hear as an incoming student to make the most of your Quinnipiac experience is to join student organizations, it’s certainly the truth,” he said. “Understandably first-year students often have reservations about getting involved in clubs, but this is the best time to get engaged, find your home among our countless organizations and develop your leadership skills. Additionally, student organizations help expand your network, engage with others of similar interests and make life-long friends.”

Ciampanelli encourages those who want to get involved with SGA to join their weekly Wednesday meetings at 4 p.m. during the semester. He said that he cannot encourage students enough to run for vacant positions and lead the changes necessary to create a better campus for all Bobcats.