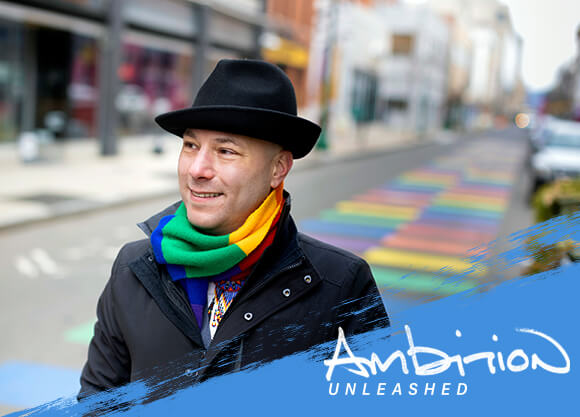 For Vince Contrucci, education isn't contained in a classroom; it also exists on the streets of the cities of the United States.

For that reason, he decided to design and lead walking tours of area cities for students to be able to walk in the footsteps of history.

It began in the streets of Manhattan many years ago after a student who, like Contrucci, identified as gay and asked what The Stonewall Inn was — and its significance in American history. The riots that began at the Greenwich Village bar are widely considered to be a watershed event that transformed the gay liberation movement in the United States.

"I became concerned that a generation of people were growing up and didn't know about their history or the rights that they have and how those rights were won," Contrucci explained. "I wanted to find a way to illustrate it in a way in which students would be interested in — and I knew that a PowerPoint presentation wouldn't be it."

When one looks to understand where the gay and lesbian civil rights movement began, it quickly becomes apparent that the most significant events happened on the East and West coasts, he explained. "And New York City is just down the street," he said.

That fall, now eight years ago, he began working on an LGBTQ+-focused walking tour of New York City with one of his students.

"When I started researching the walking tour, there wasn't a lot of information available on the web," Contrucci said. "I wanted to focus on the civil rights movement and the people who fought for our rights rather than focusing on just their personalities."

However, putting together a walking tour is not easy — and involves multiple trips to the respective area to understand not just where the events happened but the best route to take to encompass the full history, he noted.

"It has been very successful," Contrucci said. "The tour continues to expand — and I continue to learn about the history. I am not a historian, but I am committed to bringing this important history to all students."

Although his title is director of community service at the university, he doesn't view the tours as a disconnect from his core mission.

"It is an important part of my job," Contrucci said. "We all work in an educational institution. I am an educator. My job is to educate students."

Further, he noted, understanding social activism is an important part of his role, he said.

"In the context of community service, everything you do and everything you care about and value is a political statement," Contrucci said. "Protests and protest movements are part of moving the needle forward in equality, equity and inclusion. Community service work is inherently protest work."

Contrucci credited the university with giving him the resources and time to recognize his ambition and enable him to create the necessary curriculum and opportunities to fully educate students throughout programs and disciplines.

"Focusing on the work of protests and the protesters to combat or confront society's lack of interest in treating gay and lesbian people as equals was incredibly valuable and incredibly important," he said. "The nice thing about my position is there are not a lot of stipulations as to what I do. By engaging students on the tour, it broadens their perspectives of what is possible in changing their views of what is possible and the innovative ways they could work to create or broaden their understanding of their mission to get society to pay attention."

Contrucci leads tours of 12 to 15 students twice each academic year.

However, he plans and leads more than just LGBTQ+ history tours. He also designed walking tours in New Haven each semester as well as about a dozen hikes to meditative yoga each year at Sleeping Giant State Park in partnership with the health and wellness area of campus.

"I really care about my job, and I want to be successful for all students," Contrucci said. "The university recognizes the need to constantly innovate — and helps me to achieve it. The old ways are fantastic and work, but you need to evolve those methods at a certain point."

He said one cannot simply rely on ways things have always been done.

Given his efforts, it did not take long for the university to know exactly who should serve as its inaugural LGBTQ+ Fellow in 2020.

“This has always been a part of what I’ve done professionally, being an advocate for the queer population,” he said shortly after earning the honor. “I strove to find ways to roll this mission into my work in the office of community service.”

The fellowship, despite coinciding with the radical circumstances around the COVID pandemic, allowed Contrucci to launch initiatives to create a more inclusive environment at the university, as well as to offer educational opportunities around the queer community.

Under Contrucci’s tutelage, an LGBTQ+ student leadership retreat debuted in last year. Eighteen students attended the workshops and presentations. Student focus groups encouraged individuals to share their experiences, as well as to imagine the change they’d like to see on campus, said Contrucci.

“There was real interest on campus in bringing a greater understanding of the proper usage of pronouns, and how it impacts people,” he said.

Contrucci worked on the virtual program’s content, helped source a speaker and assisted with marketing the event. Fifteen students attended the workshop.

During the fellowship, Contrucci also shared his expertise to refine burgeoning initiatives around campus. He worked with the Safe Space Committee on its training module that teaches how to create a safe and inclusive environment for queer members of the Quinnipiac community. He also reviewed the descriptive language of the new gender-inclusive housing initiative for the school’s catalog.

The fellowship concluded at the end of last year, and Contrucci said he is grateful for the experience the position provided.

“It’s been really nice to have the chance to expand my reach on campus, and to connect with students that I may have not have otherwise interacted with,” he said. “I appreciate the opportunity.”