Success in the “Shark Tank” 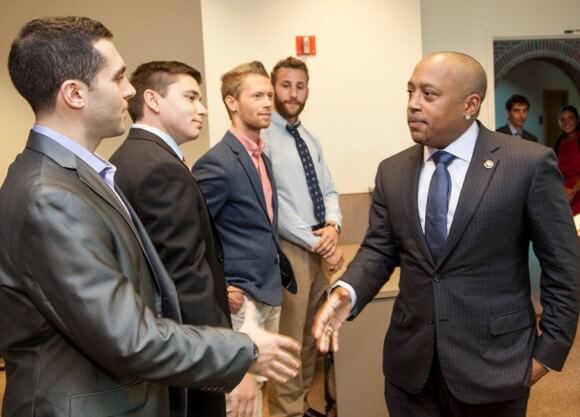 "You can't hit a target you can't visualize," explained John, who addressed a packed audience for a university-wide lecture.

With an entertaining slideshow and a DJ adding music throughout the presentation, John recounted his path to success. He described how, with no formal business training, he created a global fashion empire with retail sales exceeding $6 billion dollars and landed a starring role as an investor on "Shark Tank."

A devoted fan of hip-hop music, John was one of the first to recognize that hip-hop culture was an untapped market for fashion retailers. He founded FUBU, "For Us, By Us," and created distinctive and fashionable clothing that revolutionized the sportswear industry in the 1990s. By 1998, he had guided FUBU to a staggering $350 million in revenues, placing it in the same stratosphere as such designer sportswear labels as Donna Karan New York and Tommy Hilfiger.

John launched his entrepreneurship career by selling hand-sewn hats outside a mall. With the help of friends, he transformed his mother's house in Queens, New York, into a manufacturing hub.

In those early years, he used every resource he had to market his brand, such as sneaking into music video sets to get rappers or backup dancers to wear his clothing on-screen. He asked LL Cool J, who was from his neighborhood, to pose for a promotional photo wearing FUBU gear. The rapper-turned-actor not only took the picture, but also wore a hat with the FUBU logo for a Gap commercial. He also mentioned FUBU in the lyrics of the rap he wrote and performed in the commercial. John said the ad campaign staff didn't do their homework on the FUBU brand that was prominently featured.

Homework, or research, was among John's tips for entrepreneurial success, in addition to setting goals, loving what you do and remembering that, "you represent the brand."

Quoting his daughter's favorite cartoon character, Disney's Nemo, he reminded future entrepreneurs to never give up and "just keep swimming." John explained that 27 banks turned him down for a loan, but with his mother's help and waiting tables at Red Lobster, he found the money to keep his business growing.

Before the public lecture, John answered questions from School of Business students. Brittany Hayles ’17, who would like to open a clothing retail store, was impressed by all of his advice and in particular, his emphasis on setting goals.

"If you don't set a goal, you're basically telling yourself you can't do it," Hayles said. "You set a positive goal and you're telling the universe you can."