Women's basketball guard recognized for success on the court 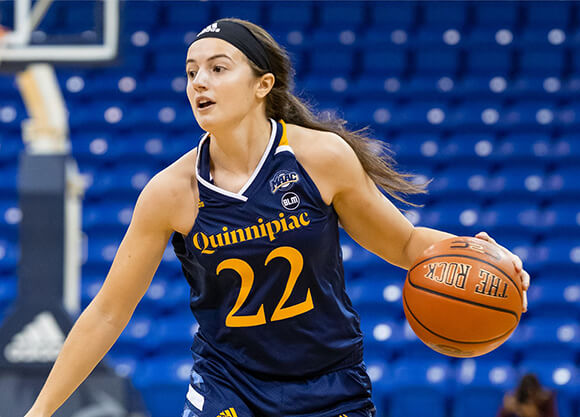 Mackenzie DeWees is heating up the court — and being recognized by the NCAA for having among the top 5 best performances in all of women's basketball.

The junior guard scored a career-high 20 points in the Bobcats' 59-55 win over MAAC-rival Marist last week, and added nine rebounds, three assists and two steals in the victory.

DeWees was also named MAAC Player of the Week by the conference as well as by College Sports Madness.

In the Bobcats' three games last week, she averaged 17 points and seven rebounds to lead Quinnipiac to three wins. The Westminster, Md., native shot an efficient 22-for-37 (59 percent) from the floor in the three-game stretch.

DeWees will take the court again with her team on Friday and Saturday at 4 p.m., at the People's United Center. Cheer on the Bobcats as they take on Siena on ESPN3 and ESPN+ respectively.