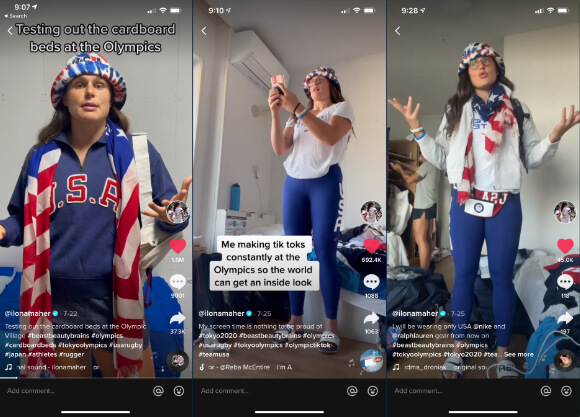 Ilona Maher ‘18 made her presence known at the 2020 Tokyo Olympics before she even stepped on the field.

Maher, a Quinnipiac nursing student alumna, started posting TikToks about the Olympics before touching down in Tokyo and quickly went viral. She then made a video that earned more than 7 million views about the now infamous cardboard beds at the Olympics Village, which she and her teammates tested out in a handful of creative ways.

While at the Olympic Village, even before her games started, Maher gained respect, love and enthusiasm from people across the world due to her infectious personality. From her videos about the cardboard beds, to the vulnerability she showed following a tough loss to Great Britain, she has brought fans along with her on her Olympic journey.

Since posting her first mega-viral video in the Olympic Village, Maher has earned more than 82 million views, more than 732,000 followers and more than 15 million likes.

"The 24-year-old is giving fans from afar an up-close-and-personal look at what goes on inside the Olympic Village — from the dining hall, to the infamous cardboard beds, to what Olympians actually talk about amongst one another, and so much more," the New York Post reported

“I was seeing through my TikToks, people were like, ‘Wait a minute, we have a USA rugby team? What’s rugby?’ And then it started a conversation, which is exactly what we want, because I want rugby to grow in this country,” Maher told NBC News