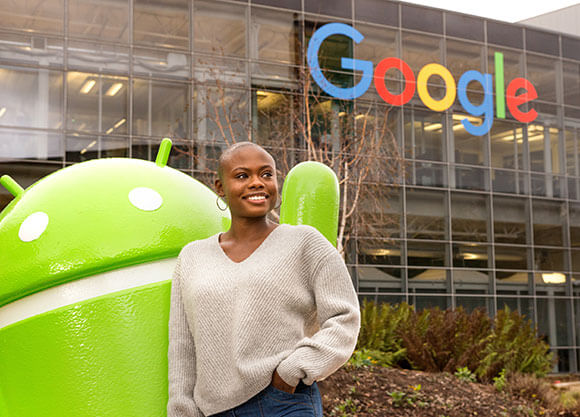 Brittany Hayles '17 combines her interest in diversity with her degree in management to help Google recruit a workforce that reflects the diversity of their users.

Brittany Hayles ’17 considered herself fortunate to be chosen for an internship at Google during her junior year. The management major parlayed that experience into a job at the renowned tech giant, and now she’s the one recruiting college students for internships as a diversity staffing specialist at Google in Mountain View, California.

Hayles, who lives in San Francisco, was hired right after graduation, first as an associate account strategist. In that role, she helped Google advertisers optimize their marketing plans and improve their returns on investment, an area she was exposed to as a marketing solutions intern in 2016.

She enjoyed that role and was successful at it. “But I knew it was not where I wanted my career to be, long term. I’ve always been really passionate about diversity,” she said.

During her own internship, Hayles had made a point of networking with many Google employees. This served her well when, a few years later, she ran into a colleague she’d befriended during that internship who was now working on a Google team recruiting underrepresented talent through internships. Hayles knew that’s what she wanted to do next.

“The conversation was great timing. I met with the manager of that team, they were hiring, and I got my current job a few weeks later,” she said.

“Our team prioritizes recruiting college students from underrepresented backgrounds who identify as black, Latinx, LGBTQA, persons with disabilities and veterans,” she noted. They seek students majoring in computer science, mechanical engineering and industrial engineering and find them at campus events and through LinkedIn. And yes, she has recruited from Quinnipiac’s School of Engineering.

Brittany recognized her internship at Google offered her both work experience, as well as valuable connections to help launch her career.

Google’s stated mission is to organize the world’s information and make it universally accessible and useful. To that end, it strives to employ a workforce that represents the users it serves.

As Hayles explains, “Google prides itself as being innovative and accessible, providing information to the entire world. We can only do that if everyone is represented in the room. If everyone looks the same and thinks the same, the company will remain stagnant, and we will be behind the curve.”

Hayles feels that her education prepared her with the fundamentals to succeed in many fields. “My professors emphasized the mentality that we had to work hard, no matter how stressed we were or how time-crunched we were,” she said. “We had our projects and our deadlines.

“That work ethic and determination I learned at QU has trickled into my career. I would not be prepared for the rigors of this job otherwise.”

She explained that Google is known for encouraging employees to work autonomously.

“Yes, we work on teams and rely on them for resources, but a lot of what I do is individualistic, and we are expected to navigate ambiguity. “You have to learn to work diligently and efficiently or else you will burn out.”

Hayles appreciates what she terms Google’s dedication to employee job satisfaction –– professionally, physically and emotionally. “The company provides a free shuttle from San Francisco, a variety of foods, a gym that offers fitness classes, meditation and even cooking classes,” she said.

Brittany credits her class and extracurricular activities at Quinnipiac with providing her valuable skills for professional success.

She feels her extracurricular life at Quinnipiac plays a part in her success. She was among the founders of the Women Empowered organization, which seeks to prepare female students for life, both professionally and personally.

“We discussed what a resume should look like, and how to deal with being the only woman on a team –– things like that,” Hayles said. As a resident assistant for two years, she learned valuable people management skills and how to provide constructive feedback, both of which she uses in her current role.

Before Google, Hayles did an internship with Rolls Royce. She said the university’s emphasis on internships is spot on.

“When you go to college, you have to do an internship in order to gain experience in the real world."