As digital subscribers increase, so does the need for content that reflects them 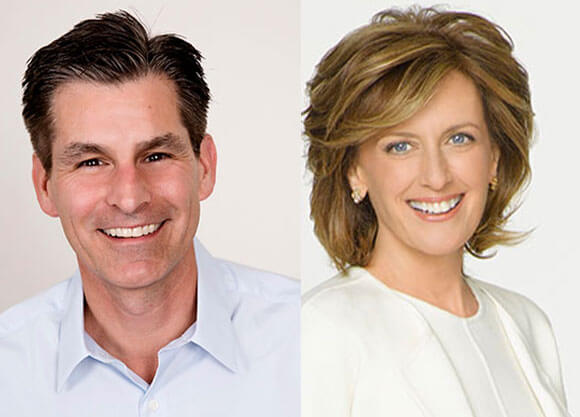 While COVID-19 has certainly impacted the consumption of TV shows around the world, it’s also required digital entertainment companies to work even harder to reflect diverse audiences and to tell their stories.

“There’s a profound obligation because if you are — and intend to be — a global platform, you have to embrace the idea that every story and everyone’s story matters,” said Anne Sweeney, a member of the Netflix board of directors and former co-chair of Disney Media Networks.

Sweeney and Mike Hopkins, senior vice president for Prime Video and Amazon Studios, joined Quinnipiac President Judy Olian for an hour-long discussion Monday night about “The Future of Entertainment.” The conversation was part of the president’s virtual speaker series, “The Way Forward.”

Assistant professor Fritz Staudmyer, chair of film, television and media arts in the School of Communications, also participated in the program. An award-winning screenwriter, Staudmyer worked at Walt Disney Studios and Nickelodeon before coming to Quinnipiac.

Hopkins, who previously served as CEO of Hulu, agreed with Sweeney’s comments regarding inclusive and representative programming in the 21st century. It’s become a social mandate for the roughly 200 streaming services available to consumers.

“You want to be telling stories about where people are coming from,” Hopkins said. “You want to tell stories with writers and actors and people in front and behind the camera who reflect the communities you’re serving. Many of these businesses are underrepresented with their customer base, so it’s really important we actually make content that makes sense for those communities.”

The challenge becomes not just creating enough content for a globally diverse audience with a voracious appetite for shows, but also deciding what kind of content — blockbuster movies that debut on streaming services, an original series that becomes can’t-miss TV, children’s programs, and, of course, archived content that comes wrapped in nostalgia, loyalty and a proven audience.

With so many viewers — Netflix and Prime Video each have over 200 million customers — and so many different tastes in programming, too much content can be numbing and saturating.

“If you look at the number of shows being produced today — I don’t know what the increase has been the last five or six years — but I’m sure it’s tripled,” Hopkins said. “I think the number of choices that people have for TV has become a little overwhelming. You can only make so many relationships with shows at a time.”

The seemingly strategic introduction of a kinder, gentler show during the pandemic — take the Apple TV+ hit “Ted Lasso,” for example — was instead a fortuitous ratings victory. A typical TV show takes years to develop, Sweeney and Hopkins explained. Production on “Ted Lasso” began well before COVID spread around the world.

Sometimes, a coincidence wins the day. Other times, hard work and big budgets come up short. Big hits are always elusive in the entertainment business, just like accepted scripts.

While some TV shows can be binged with a bowl of popcorn and a pair of pajamas, others require subscribers to wait another week for the next episode. The COVID pandemic has changed both viewing habits and distribution cycles over the last 18 months.

“One of the things that’s been interesting is watching how people are consuming content now,” said Sweeney, who has repeatedly been named the "Most Powerful Woman in Entertainment" by The Hollywood Reporter. “Sometimes, they have every single episode of every season available to them, and they’ll choose to watch only one episode instead of 20 in one gulp.

“Given the slowdowns that everyone experienced during COVID — and trying to get things produced — many of the streamers are introducing one new episode per week of a show,” she added. “Watching people’s behavior and how they’re consuming now versus a couple of years ago when it was all about binging will be interesting to track in the years ahead.”