Black students reset the conversation in ‘The Cut’ 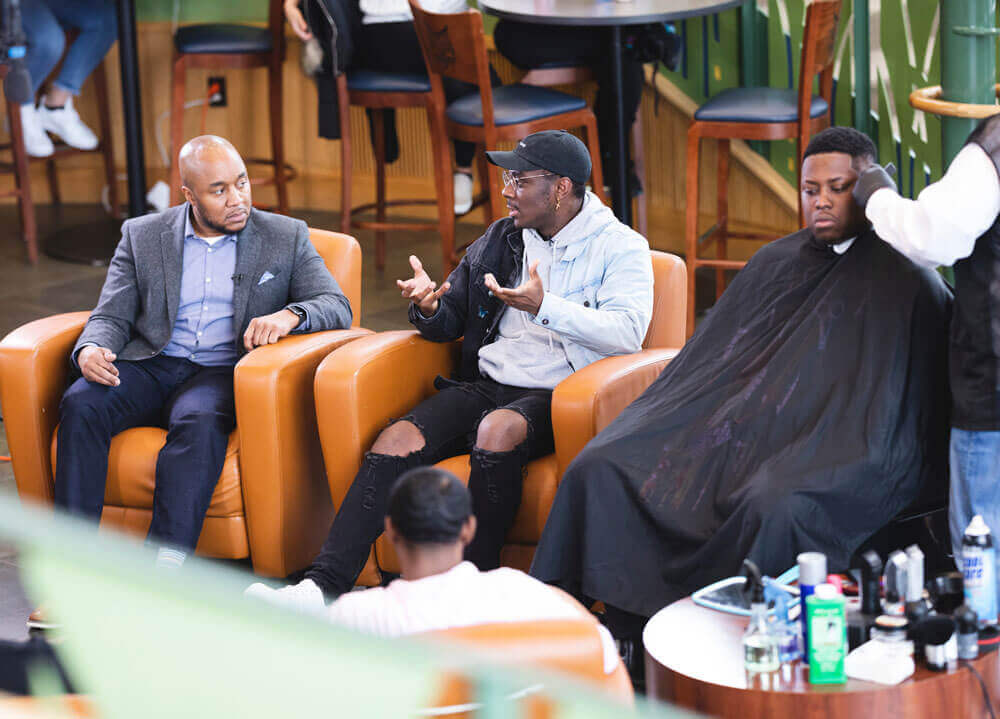 Welcome to “The Cut,” a new video series that began taping in January to promote a safe space and a platform for Black students to share their thoughts with each other as well as faculty and staff mentors. The first episode debuted on Friday, August 14.

The set is purposefully simple. The lone fixture is a barbershop chair near the fireplace in the Piazza, one of the most visible spots on Quinnipiac’s Mount Carmel Campus.

The conversations, however, are anything but simple. They are sophisticated, urgent, provocative and painful. Often, all at once.

For Black men, the local barbershop is more than just a fade in the chair. It’s a seat at the table, a place for marginalized voices to be heard and respected. “The Cut” is an extension of that proud community. It’s an open mic for unfiltered discussions about politics, racism, the criminal justice system, hypermasculinity, any number of social issues.

“These are Quinnipiac students engaged in real conversations. This is their space,” said Don C. Sawyer III, PhD, vice president for equity and inclusion, who helped to bring “The Cut” from concept to reality. The series was initially modeled after “Barbershop Debates,” a project started by Jay Kemp of New Haven, one of Sawyer’s colleagues.

“The current racial awakening in this country, the pandemic, the upcoming election, those things are going to give us a lot of topics to discuss,” Sawyer said. “But this space was never meant just to have people watch it. We want the voices and experiences of these students to be centered. We want people to be inspired. We want people to know they matter and belong.”

A foot pedal on the back of a barbershop chair isn’t needed to elevate these conversations. The hot takes — and there are many — see to that. Sometimes, the exchanges are raw and reflexive, but that’s the whole point.

“These dialogues might make some people feel uncomfortable, but they’re important. You can’t turn a blind eye to them,” said Esau Greene ’21, the student host of “The Cut” and a dual major in sociology and political science. “This just feels like we’re doing the right thing.

“If I see a bunch of students who look like me, who are talking about things I care about, that’s huge,” Greene said. “We’re trying to create a level of authenticity with this, a real connection with other students of color at Quinnipiac.”