Bobcat amplifies voices of the underrepresented around the world 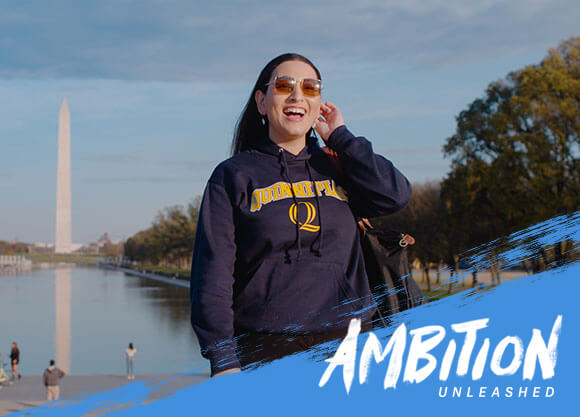 From her very first day as a Quinnipiac Bobcat, Ambar Pagan '22 worked diligently to amplify the voices of underrepresented women — not just at the university but around the world.

Throughout her four years as a student, she led the student body with ambition to grow a community of excellence, served as an advocate for multicultural acceptance, and held leadership positions for numerous organizations and initiatives.

“I find the most fulfillment when empowering those around me to become leaders of change and creating projects that lead to global progress. I'm passionate about helping others and using my platform as a student leader to uplift the unheard voices and unify the community,” Pagan said.

One of her primary initiatives included working on QU Culture, an organization that strived to educate, entertain and empower underrepresented voices throughout the university.

One of her notable contributions was co-founding “Curl Talk,” a safe space designed to empower women of color. The weekly YouTube broadcast has reached thousands of viewers throughout and beyond the university community — and sparked countless important conversations.

“My goal for this project was to inspire others to contribute their artistic talents and creativity to help make their college community and the world a better place,” said Pagan.

Although she was already an active ambassador for underrepresented populations around campus, her ambition blossomed in the classroom.

She was first exposed to politics from the courses she took in the College of Arts and Sciences at Quinnipiac.

She said she felt inspired to make a difference in her community as a result of the discussions in these courses.

“Ambar’s participation was outstanding from the very beginning of the semester,” said Scauso. “She always sought to overcome obstacles and seek solutions not only for herself, but also for others.”

Through the course, Pagan represented Quinnipiac at a Democratic presidential debate where she observed a major problem in politics.

“As a young college student, I was disappointed to see the underrepresentation of women in politics and was motivated to bridge the gender gap among public representatives,” Pagan said.

Pagan was able to speak with other women in politics, although there were few at this event.

“I had the opportunity to express my interest in running for public office to U.S. Sen. [Elizabeth] Warren and will forever cherish what she told me: ‘I’ll start it and you bring it back up,’” Pagan said.

Because of her experiences in the classroom, Pagan said she felt confident that although there is not much of a path laid out for her and other women in American politics, she can pursue anything.

“Professor Scauso taught me that change is possible, and to value the unheard voices that exist worldwide.”

Built on a record of success, Pagan decided to pursue an opportunity in the heart of politics – Washington, D.C.

Pagan spent a full semester in the nation’s capital through Quinnipiac’s program, QU in DC, in which she was a legislative intern for U.S. Rep. Nydia Velázquez.

In addition, she participated in development workshops and took an academic course.

“Overall, my congressional internship experience gave me the opportunity to witness firsthand the impact policy has on diverse communities and helped me understand the purpose of Congress: to represent all people,” Pagan said.

Although she was only an intern, Pagan utilized the many opportunities she had to lead and take initiative.

“I had the honor of spearheading a constituent meeting on the Afghan Adjustment Act that would allow evacuees to adjust their status and apply for permanent residence after a certain amount of time in the United States,” Pagan said.

In addition, Pagan connected with high-profile individuals that she now has as mentors.

“As a 20-year-old Latina woman, I look up to Congresswoman Velázquez as my role model to pursue a political career and as my mentor in learning how to overcome the challenges of being a woman of color with a career in public office,” Pagan said.

Pagan was inspired through her time with Velázquez, adding that she now focuses on surrounding herself with resilient individuals.

“Representative Velázquez’s mother once told her, ‘Dime con quien andas, y te dire quien eres’—  ‘Tell me with whom you walk, and I will tell you who you are.’ I've decided to surround myself with visionary and resilient leaders like Representative Velázquez, and to walk with her to empower others,” Pagan said.

Pagan has made it clear that she is not slowing down anytime soon. In the future, Pagan plans to use the tools she sharpened at Quinnipiac to make a positive impact worldwide.

“My long-term legacy goal is to build bridges between countries, develop new leaders and promote unity in the world,” Pagan said.