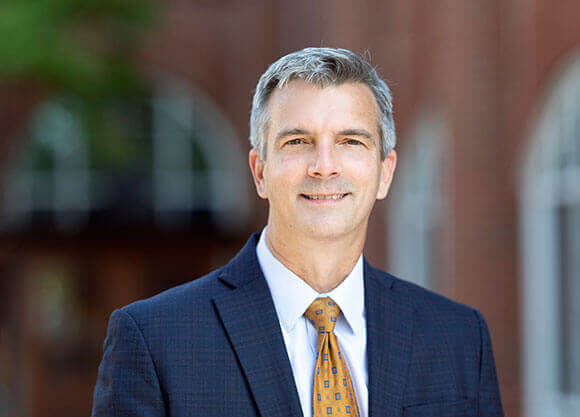 A harrowing account by Jason Burke, the director of veteran and military affairs at Quinnipiac, is included in acclaimed author James Patterson’s new book, “Walk in My Combat Boots: True Stories from America's Bravest Warriors.”

Patterson, the world’s best-selling author, wrote the book with U.S. Army 1st Sgt. (Ret.) Matt Eversmann, whose last assignment was as an infantry company first sergeant in the 10th Mountain Division during the surge in Iraq. He spent nearly half of his 20-year career in the 75th Ranger Regiment and was a member of Task Force Ranger, the unit immortalized in the film, “Black Hawk Down.”

“The goal of ‘Walk in My Combat Boots’ when Sgt. Matt Eversmann and I wrote it was for readers who had no ties to or service in the military to say, ‘I had no idea that this is what it is like,’ and for current and retired military to say, ‘Yeah, they got it right,’” Patterson said. “I think we accomplished our mission.

“The story of Capt. Jason Burke, eyeball-to-eyeball with the world’s most wanted female terrorist in one of Afghanistan’s most dangerous forward bases, would be a thrilling piece of fiction,” Patterson added. “But it is real, and the story had not been shared publicly until this book. It is good to know Burke is mentoring young veterans now.”

“Walk in My Combat Boots” is a powerful collection crafted from hundreds of original interviews by Patterson and Eversmann. It includes brutally honest stories usually only shared among comrades in arms. Told in the voices of men and women who have fought overseas from Vietnam to Iraq and Afghanistan, the book is a rare, eye-opening look into what wearing the uniform, fighting in combat, losing friends and coming home is really like.

Burke said he was introduced to Patterson by Tim Malloy, the polling analyst for the Quinnipiac University Poll who has extensive political and wartime reporting experience.

“It is a privilege to serve in the military, and, with that, the experiences are entrusted to those who are part of that world,” Burke said. “However, telling some of these profound stories to the civilian population provides a small glimpse of life in the military and the sacrifices made every day by people in uniform.”

Burke’s vignette centers on his 2008 meeting inside the governor of Ghazi’s compound in the Islamic Republic of Afghanistan. Burke and the U.S. Army’s maneuver battalion were there to discuss the strategy for Afghanistan’s upcoming voter registration with the governor and his staff. Suddenly, the doors swung open and an Afghan police officer entered, flanked by the governor’s security guards. In an instant, they whisked away the governor.

An hour later, the governor returned and explained the police had arrested a woman outside the compound. She was carrying a large quantity of plastic explosives, some powdered poison and a written manifesto.

The police later found a considerable number of handwritten notes listing various U.S. landmarks as well as her hatred for America. The woman is Aafia Siddiqui, a Pakistani neuroscientist and terrorist on the FBI’s Most Wanted List. They call her “Lady al-Qaeda.”

While in custody, Siddiqui shot at visiting FBI and U.S. Army personnel with an M4 carbine that one of the interrogators had placed on the floor by his feet. Siddiqui was shot in the torso when the warrant officer returned fire. She was hospitalized, treated and extradited to the United States.

Burke recalls in the chapter, “In the following days, while Aafia Siddiqui is recovering from her wounds at a nearby military hospital, I’ll learn more about the infamous woman who wanted to kill me and my colleagues; things like how she was carrying sodium cyanide and a thumb drive containing manuals on bomb making, documents on how to weaponize Ebola, and thousands of electronic correspondences between terrorist cells operating in the U.S. But the most unbelievable part, what I keep coming back to over and over again, is her connection to the United States.”

Today, Siddiqui is imprisoned in Texas.

“Jason Burke is perhaps the most humble and unassuming warrior this nation has ever produced,” Eversmann said. “His journey from Navy pilot to an on-the-ground liaison officer to the fledgling Afghan government is remarkable. If that wasn’t enough, while serving in Afghanistan, he was targeted by the most wanted female Al-Qaeda assassin in the world. His story of service, leadership and courage truly sets the example for all of us to follow.”

Burke, who joined Quinnipiac in 2013, serves current and potential student veterans both on and off campus. In 2020, he received Quinnipiac’s highest staff honor, the Excellence in Service to Students Award.

“Walk in My Combat Boots” has received rave reviews from retired generals, news anchors and former President Bill Clinton, who said, “This book will take your breath away, break your heart, and leave you in awe of the hard work, raw courage, ingenuity and resilience of the men and women who wear the boots. You'll hear them say why they do it, and how they deal with triumph, tragedy and living with the legacy of their service. Every American should read it."

“Walk in My Combat Boots” will be available Feb. 8 wherever books are sold. Patterson is best known for his many enduring fictional characters and series, including “Alex Cross,” the “Women’s Murder Club,” “Michael Bennett,” “Maximum Ride,” “Middle School,” “I Funny” and “Jacky Ha-Ha.”