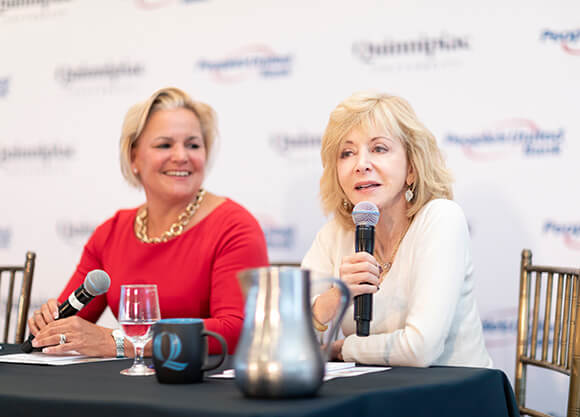 Take a risk to advance in your career, even if you don’t feel quite ready, said Judy Olian, Quinnipiac’s ninth president. She shared inspiring stories and tips gleaned over her distinguished career to inspire more than 300 professionals and students at the inaugural event sponsored by the People’s United Center for Women & Business on Nov. 6.

Olian was one of two speakers at the program at Cascade in Hamden, titled “Women in Leadership: Lessons from the Top.” Sara Longobardi, senior executive vice president of retail banking at People’s United Bank, also discussed her career success, and both answered questions afterward.

Citing statistics from the Women in the Workplace 2018 report, Fullick-Jagiela said it is clear that companies need to double down on their diversity and inclusivity efforts. “Women are significantly outnumbered in senior leadership positions. Only one in five senior leaders are women and one in 25 are women of color. That is unacceptable,” she said, adding that women need to work together to find solutions.

Embracing risk is among Olian’s top 10 tips for women who aspire to leadership roles. “Don’t be afraid to be afraid,” she said, noting that when a man is offered a promotion, he generally believes he is more than ready while a woman is apt to give many reasons why she is not prepared to assume that next role.

“As Guy Kawasaki, the famous Apple guru said, ‘Don’t worry, be crappy, ship, then test.’ What Guy meant was put yourself and your product out there, maybe even before it or you are perfect. And don’t be paralyzed into waiting until everything is perfect to move on to that next thing.”

Olian came to Quinnipiac after serving as dean and John E. Anderson Chair of Management at the UCLA Anderson School of Management. Before that, she was dean and professor of management at the Smeal College of Business Administration at Penn State University and a professor and senior associate dean at the Smith School of Business at the University of Maryland.

It was the Maryland position that would frame her philosophy on learning from failure, another item on her tip list. At Maryland, Olian had risen through the ranks to become the “No. 2 person” in the business school and was heir apparent to the deanship. The search went on for a year, and she didn’t get the job. She worked through her disappointment and collaborated with the new dean. In the process, she learned a lot about resilience and grace.

“When you fail - and notice I didn't say if you fail — be honest enough to look at what you own about that failure,” she said, adding that sometimes, it’s just business. “You have to be willing to accept failure if you’re going on to the next thing; otherwise, you’ll never take risks,” she said.

Parity in the workforce is important to her, and Olian said she feels a strong obligation to help young women and girls achieve it. “Who would have thought that in 2018, we still wouldn’t be there?” she asked.

Many of Olian’s recommendations resonated with her audience. She urged them to say yes to new assignments — “You will learn a lot and become known as that ‘can do’ person with a breadth of knowledge about a lot of valuable stuff.” She related that she once accompanied the president of a university on an international trip because no one else wanted to do it. “But he ended up being a key sponsor throughout my career just because I said yes, and I happened to speak the language.”

She cautioned her audience against taking criticism personally. “Research shows that women tend to internalize failure and externalize success while men do the opposite,” she noted.

Role models and mentors are important, and some of the most influential people can be mothers, aunts and sisters. “My mother was a force and a role model and gave me the confidence to go for it,” she remembered. And her No. 1 tip was offered with a nod to her husband, Peter Liberti. “Pick the right life partner, who can be an enabler and supporter versus a blocker and barrier to career aspirations and success.”

Sara Longobardi also credited her husband with giving her the support she needed to rise through the ranks at People’s, where she began in 1991 as an audit supervisor. She told the women and a sprinkling of men in the audience that everyone should have a personal brand. “I was known for a strong work ethic. I put in a lot of hours, I got the job done, and I committed myself to it.” As a result, in her early 30s, she was promoted over her supervisor.

“Always remember the power of gratitude and modesty—that’s how I dealt with it. I didn’t have guilt. I felt very fortunate for all they had taught me, and I knew the work we did as a department was important,” she said, adding that the bank’s focus on customers, employees and the community align with her core values.

The mother of five sometimes is asked how she does it all. Coffee and chocolate, she said with a smile, but more seriously, she added: “Be in the moment, focus on work when you are there and focus on the kids when you are home.”

Longobardi knows life can be lonely at the top for women in leadership positions.

“If you find yourself the only woman in the room, show competency and confidence, and if you have the goods, show what you have done. And if your organization's culture needs changing, try to do it one person at a time.”