Irish language version of "The Bad Times" to be published 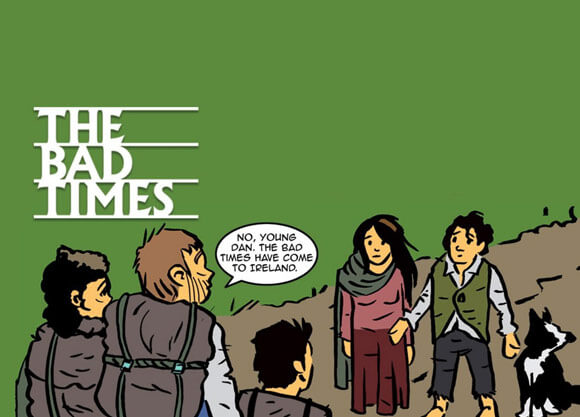 An Irish language version of, "The Bad Times: An Drochshaol,” a graphic novel co-authored by Christine Kinealy, founding director of Ireland's Great Hunger Institute at Quinnipiac University, and John A. Walsh, an illustrator and graphic novelist, will be released Nov. 22 by Dublin-based publisher Coiscéim.

The official launch will be in Stormont, seat of the Northern Ireland Parliament, by Máirtín Ó Muilleoir MLA, the minister for finance.

"The Bad Times" tells the tale of the Great Hunger, from the point of view of three teenagers and their dog, Cú, from Kilkee, County Clare, in the west of Ireland. The Great Hunger refers to a tragic period in Irish history when more than one million people died of famine or famine-related diseases. Many Irish speakers simply referred to this calamity as "an drochshaol," which roughly translates as "the bad times."

Quinnipiac Press published the original English novel in collaboration with Ireland's Great Hunger Institute. It is available at Amazon.com. or from Xanedu.com.

The translation was made possible by a grant from the Irish government and was done by Jonathan Ó Néill, a County Clare native and lecturer at the University of St. Thomas in Texas. An Irish curriculum was provided by renowned famine historian, Dr. Ciarán O Murchadha, also of Clare.

“I am so happy that we were able to create an Irish language version of ‘The Bad Times,’” Kinealy said. “It is the language that would have been spoken by the majority of poor people in the 1840s. It was also the language of my ancestors.”

Kinealy is the author of many books on the Irish Famine, including "This Great Calamity: The Irish Famine 1845-52" and "Charity and the Great Hunger in Ireland: The Kindness of Strangers." She has a PhD from Trinity College in Dublin. She and her children, Siobhán and Ciarán, and puppy, Cú, now live in the United States.

Walsh is the creator of "Go Home Paddy," a graphic novel that is being serialized online. He lives in Boston with his wife, Rachel, and daughter, Fiona Maeve.

Ireland's Great Hunger Institute is a scholarly resource for the study of the Great Hunger. Through a strategic program of lectures, conferences, course offerings and publications, the institute fosters a deeper understanding of this tragedy and its causes and consequences. To encourage original scholarship and meaningful engagement, the institute develops and makes available the Great Hunger Collection, a unique array of primary, secondary and cultural sources, to students and scholars.