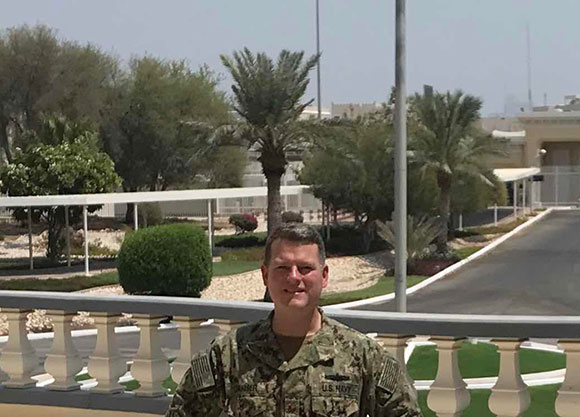 For one Quinnipiac law student, learning doesn’t stop when duty calls. Navy Lieutenant Commander Brian Conatser, JD ‘21 balances his studies with military service as he performs active duty in Qatar, where he’s been stationed since mid-June.

Conatser hails from Woodbridge, Connecticut, where he lives with his wife, Megan, and their three children — Lucy and Jack, 5-month-old twins, and Ellie, his 4-year-old daughter.

After completing seven years of active U.S. Navy duty, he earned a bachelor’s degree from the College of Holy Cross, then went on to earn a MBA at Fordham University. When his family relocated to Connecticut, Conatser took a tour of Quinnipiac, and instantly fell in love. He enrolled in Fall 2018.

“I have young children, and I wanted to be close to home,” he said. “I was really impressed with how friendly everyone was, and how accessible the professors are.”

Now a member of the U.S. Navy Reserves, Conatser expected to eventually be deployed overseas.

His previous tours include serving as anti-submarine warfare officer on the USS Laboon during two deployments to the Gulf of Aden, and as executive officer and weapons officer of USS Typhoon homeported in Bahrain.

Conatser is currently working in the U.S. Embassy in Doha, Qatar, where he serves as a U.S. Navy forces liaison to the Qatari Navy Coast Guard and the United States Marine Corps.

“I’m happy that I got the hand I was dealt,” he said. “It's an exciting assignment, and a unique opportunity to work at the junction between the military and diplomacy.”

Conatser is also assisting in the aftermath of the U.S.’s recent withdrawal from Afghanistan by aiding those fleeing to Qatar.

The tour continues to be a positive experience.

“It's going great; Qatar is beautiful. Everyone's very friendly, and wants a relationship to develop between our two countries,” he said. The toughest period of COVID seems to be over, and the Qatari economy is almost completely reopened. The embassy is fully operational, though masks are still required for workers, according to Conatser.

When orders came for his deployment, Conatser was determined to keep up his studies.

With support from Associate Dean for Academic Affairs and Professor of Law Kevin Barry, he was able to enroll in the classes he needed. Seven hours ahead of the U.S., Conatser spends his nights in class and studying. Any spare time he finds is filled with reading.

Conatser is on track to graduate this December, and said he credits the personalized attention he’s receiving from his Quinnipiac professors as an intrinsic element of his continued success in the (virtual) classroom.

“Professor Bob White has been a champ in bringing the Zoom cart into his symposium, giving me the opportunity to actively participate, even though I’m the only one in that class who isn't on campus,” says Conatser.

And Conatser’s professors are continually inspired by his learning and devotion to his classes.

“Brian is taking my course on the Financial Impact of COVID. It’s held at 6 p.m. in Connecticut, which is 1 a.m. in Qatar. If you want [to read] about resilience and service, here it is,” said White.

Upon returning stateside next April, Conantser plans to use his law degree to pursue housing law.

After four years of working in the office of community planning at the U.S. Department of Housing and Urban Development, he hopes to focus on fair housing financing.