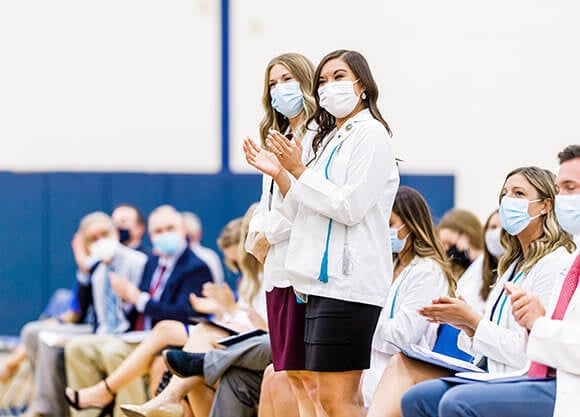 As Natalie Meyers walked across the stage, wearing her professional white coat for the first time, the joy was unmistakable. So was the applause.

Meyers didn’t get into Quinnipiac’s nationally ranked physician assistant program the first time she applied. Or the second. Finally, on her third try, Meyers was accepted into her dream school.

But a few weeks into her studies, Meyers was diagnosed with breast cancer and left the program. Over the next year, even on her hardest and darkest days, Meyers vowed to rejoin her classmates and become a physician assistant.

Last week, at the Certificate Award Ceremony for the Class of 2021, she kept her promise.

“It’s been an incredible journey,” Meyers said. “This whole experience — fighting my battle, coming back during COVID — it taught me resiliency. But that’s who PA’s are. We adapt. We’re resilient. We adapt to ever-changing environments and always do the best we can.”

In recognition of her courage, Meyers earned the Director’s Award — and that unmistakable round of applause as she crossed the stage. Meyers was one of 50 physician assistant graduates honored at Burt Kahn Court on the Mount Carmel Campus before nearly 300 friends and family members.

It was a night to celebrate the hard work and achievements of these newly minted PA school graduates. Eight of them were Urban Health Scholars who completed a rigorous program to deliver preventative and primary care to Connecticut’s underserved communities.

Seven of the graduates were inducted into Pi Alpha, the national physician assistant honor society. Two of those graduates, Stephanie Cook and Bari Peyser, also were Urban Health Scholars.

“I knew when I came here, I would get the education, the clinical skills and the training I needed to be successful,” said Peyser, who served in the House of Delegates of the American Academy of Physician Assistants as a student delegate.

“I’ve always wanted to help more. I’ve always felt like I had a greater purpose to serve others,” Peyser said. “I’m so happy I chose being a PA for my career. I love medicine. I feel completely fulfilled and excited.”

Another PA graduate, Madeline Ouellette, received the Academic Excellence Award and the Medical Writing Award. As a class, everyone recited the Physician Assistant Professional Oath as part of the ceremony.

Cindy Rossi, clinical professor and director of clinical education, was named Faculty Member of the Year by the Class of 2021. Michael Devanney, MHS ’09, former president of the Connecticut Academy of Physician Assistants, received the Distinguished Alumni Award.

“People will not always remember exactly what you did for them, but they will always remember how you made them feel,” said Lisa Barratt, clinical associate professor and director of didactic education. “Never underestimate the effect you may have on one person.

“This is what sets our graduates apart from other PA’s,” Barratt said. “The ability to look at each and every patient and not see them as a potential problem or difficulty — the gallbladder in room 4 or the [heart attack] in triage — but to see them as someone’s mother, father, brother, sister or loved one.”

Or even, the PA student battling breast cancer — and beating it to finish her degree.

“Winners often encounter what seem like insurmountable obstacles before they triumph. They finally win because they refuse to become discouraged by their defeats,” said Terry O’Donnell, interim PA program director, clinical associate professor and chair of the PA studies department.

“For Natalie Meyers, these disappointments, setbacks and obstacles became challenges that she always faced with determination, dignity and grace,” O’Donnell said. “She was never defeated.”

O’Donnell pointed to James Whitaker, the first American to reach the summit of Mount Everest in 1963, as a shining example. Whitaker was 34 years old when he overcame every challenge — the hypothermia, the avalanches, the dehydration and the doubt.

“You don’t really conquer such a mountain. You conquer yourself,” O’Donnell said, reading Whitaker’s remarks aloud. “You overcome sickness and everything else — your pain, aches, fatigue and fears — to reach the summit.”

For Natalie Meyers and the other PA graduates, the view from the summit was worth the climb. They even dressed for the occasion in their professional white coats, the enduring symbol of a commitment to help others.