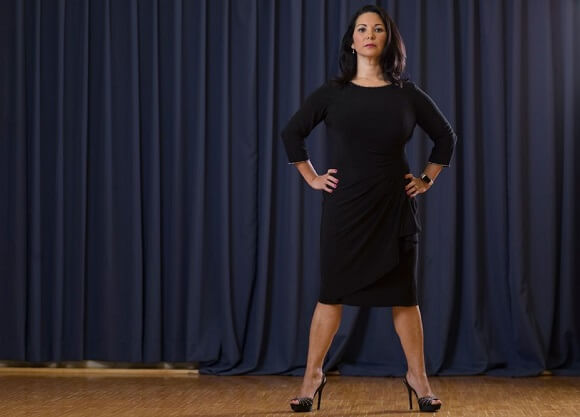 In her classroom, Kiku Jones snaps to attention with her hands on her hips.

The associate professor of computer information systems uses the stance to empower her teaching as well as her students. As she takes roll call in her senior capstone class, each student stands up and assumes a new identity.

Some, like Jones, channel Wonder Woman. Other channel their inner Superman. Others mimic the Heisman Trophy or flex like a body-builder.

The confidence carries into their work.

“It’s really about making that connection with my students. The power poses are just one part of it,” Jones said. “They’re seniors. They’ve done the work. They should be confident.”

Jones’ ability to reach students in bold, transformative ways earned her tenure and a Center for Excellence in Teaching award last fall. She began at Quinnipiac in 2013, after working at a health care conglomerate in Kentucky, and later, taking a leadership role at Feed the Children.

“As a student, I always felt like the teachers I connected with the most were those with corporate experience because I got to hear their real-world stories,” Jones said.

Her senior capstone class is focused on real-world learning. She splits the class into groups to help meet the website needs of nonprofits. The projects are critiqued by IT professionals. One project choice is Leah’s Dragonfly Dash, a road race that raises money for local children in memory of a 6-year-old girl who died in a car accident.

On a global scale, her students also have built a website for a middle school in San Lucas Tolimán in Guatemala.

“I strongly believe in the importance of giving back to others,” Jones said. “We’re here to serve.”