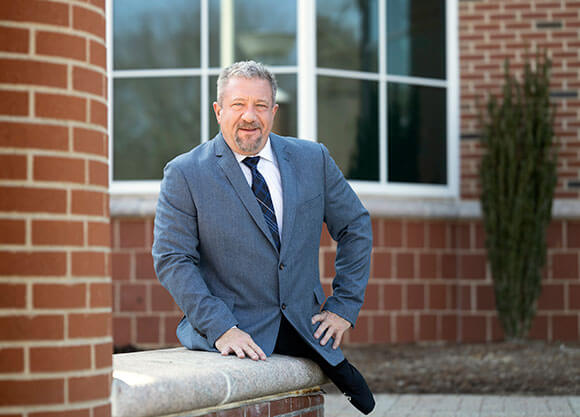 Professor Dave Stevens has earned a prestigious award from the Runway of Dreams Foundation.

Stevens, a professional in residence in the School of Communications and director of the Ability Media program at Quinnipiac, was honored with the foundation’s Inspirational Achievement Award on September 9 in New York City.

“It’s been an unbelievable year so far with the launching of Ability Media with Dean Christopher Roush and the success we have had locally and nationally with that,” Stevens said. “Now to be honored at fashion week, it blows my mind.”

The Runway of Dreams Foundation is a non-profit organization that works toward a future of inclusion, acceptance and opportunity in the fashion industry for people with disabilities.

Leigh Steinberg, a noted sports agent, author and philanthropist, presented Stevens with the award at the foundation’s gala at The Glasshouse event space.

“To have legendary sports agent and friend Leigh Steinberg present me is just the icing on the cake,” Stevens added.

Born without hips and legs, Stevens has had a distinguished media career. He worked at ESPN for more than 20 years as the assignment desk manager and then as coverage editor. He covered 14 Super Bowls and three World Series, and he has won seven national sports Emmys. Prior to ESPN, he worked at KSTP-TV in Minneapolis.

In March, Stevens and Quinnipiac launched Ability Media, which educates the public with stories about the unique skills people with disabilities.

“Dave Stevens has made a difference in the lives of our students who have worked on Ability Media, and the high school students who attended the Ability Media camp this summer,” Roush said. “It’s great to see him honored in this way.”

Stevens is the only legless player in sports history to have played NCAA football (Augsburg University in Minnesota) and minor league baseball (St. Paul Saints). He joined the Disability Dream & Do Foundation in 2016 and helps put on baseball camps for disabled children across the country. In addition, he is a highly sought-after motivational speaker and he has worked as the U.S. correspondent for The Disability Channel in Canada.