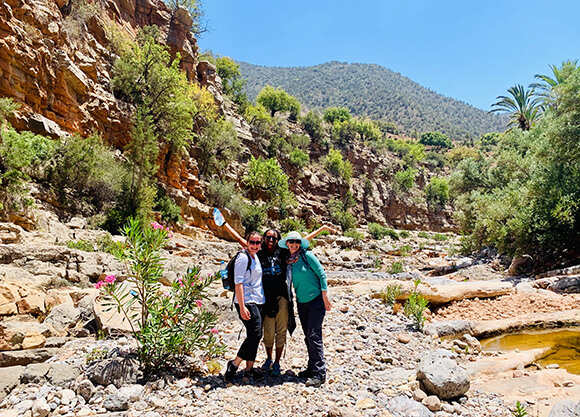 In addition to generating a deeper understanding of cultural humility, for Elyssa Wrubel ’20, a 10-day trip to Morocco led to a competitive post-graduation opportunity.

“This type of global learning — where you’re not just studying in a different country but studying the people, places, and cultures of that country — is so important,” Wrubel said. “It really challenges you as a learner and as a human.”

She visited Morocco in May 2019 as part of a faculty-led abroad course taught by Hillary Haldane, professor of anthropology.

Although she entered college thinking she did not want to study abroad, Wrubel was drawn by her interest in anthropology. She was introduced to the discipline through Haldane’s gender, sex, and sexuality class, which she took to fulfill her women’s and gender studies minor.

Though she did not intend to take an anthropology class, Wrubel acknowledges the ways it transformed her learning: “it was so new, but consistently intriguing. We were able to learn about topics that I had previously discussed and place them into entirely different contexts, offering me an expanded worldview and a more holistic and well-rounded education.”

Wrubel’s quickly developed passion for anthropology led her to take anthropology of Morocco. The course — consisting of 10 students — involved five class meetings and the reading of two books before traveling to Morocco.

Partnering with the Dar Si Hmad Ethnographic Field School, the students spent most of their time in the coastal cities of Agadir and Sidi Ifni.

“Our time at DSH exposed us to a variety of topics,” Wrubel said, “ranging from gender inequality to water insecurity — and involved a number of immersive experiences, including a visit to their fog collection site, the largest in the world, through which they harvest fog to provide potable water to local communities.”

Most striking to Wrubel, however, was the interpretive labor that she and her classmates were asked to do as they examined their own cultural biases.

“When people talk about Africa, they talk about it as a country, and they think of it as inherently dangerous and impoverished and primarily desert,” Wrubel said.

She noted the disconnect between this narrative and what she observed in Morocco, and commented on the process of “cultural humility” she and her classmates engaged in as they reflected on and combatted the assumptions they carried from such narratives.

After returning from the trip, Wrubel was invited to apply for a fellowship with Dar Si Hmad, which she was awarded in 2020. Intended to be in person, Wrubel worked virtually as the communications, education and empowerment intern, teaching English classes to women in high school in Morocco. She was funded through Sigma Tau Delta—the International English Honor Society—for this fellowship. She is currently pursuing an MA/PhD in English literature and teaching first-year writing courses at UConn, with the intention of becoming an English professor.

“This kind of educational opportunity is a privilege,” Wrubel notes of her study abroad, “and if you are able to pursue your passions and interests in this way, you should. You never know where it may lead.”