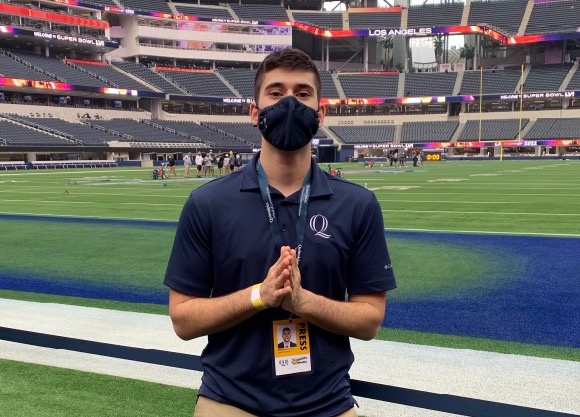 A Quinnipiac team is headed to the Super Bowl.

Six students from the university’s Q30 television station and Ability Media program will join professional-in-residence Dave Stevens in covering a week’s worth of events leading up to Super Bowl LVI, which will take place at SoFi Stadium in Inglewood, California, on Sunday, Feb. 13.

“It is definitely the opportunity of a lifetime,” Roberts, a senior and operations director for Ability Media, told Fox 61 Connecticut. “There was never even a thought that something like this could happen. I expect to do a lot and be overloaded with work, which I don’t mind. It is going to be a lot of fun.”

The students will conduct interviews Feb. 5-13 with athletes, coaches and celebrity entertainers on “Radio Row” and cover events including a celebrity flag football game organized by Snoop Dogg and a Super Bowl party hosted by Leigh Steinberg, a noted sports agent, author and philanthropist, at Sony Pictures.

“I just want to give the student journalists the confidence that they can talk to anyone from Snoop Dogg to Lady Gaga to Russell Crowe and do the job,” said Stevens, the director of Ability Media.

Stevens won a humanitarian award for his work with charities at the Steinberg party.

“There’s going to be movie stars, sports stars and influencers for them to interview," said Stevens. "This is my way to give back to Quinnipiac. We’re giving the students a unique experience and something to really look forward to.”

Q30 is the official student-run television station of Quinnipiac University. Ability Media, launched in March by Quinnipiac’s School of Communications and Stevens, educates the public with stories about the unique skills people with disabilities offer, starting with the media industry, where less than 2% of the film and TV workforce have disabilities.

Born without hips and legs, Stevens has enjoyed a distinguished media career. He worked at ESPN for more than 20 years as the assignment desk manager and then as coverage editor. He covered 26 Super Bowls and three World Series, and he has won seven national sports Emmys.

The Quinnipiac contingent also includes students involved with Quinnipiac’s QU in LA program. They will be joined by six wounded veterans.

"In addition to the students getting a chance to interview a unique blend of stars, I want people looking at us and asking us questions about what Ability Media is all about,” Stevens said.