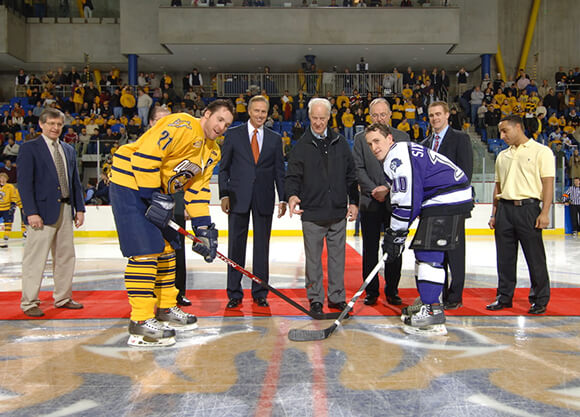 The university took a major leap forward 15 years ago this week when one of the finest athletic facilities in the country opened, marking the completion of the first building on the new York Hill Campus.

Students, alumni, parents, faculty and staff filled the circle in front of the 180,350-square-foot arena, now named the People’s United Center, for the unveiling of the iconic Bobcat statue and dual 3,000+-seat basketball and hockey arenas.

That week, the men’s and women’s basketball teams as well as the women's and men’s ice hockey teams hosted games — with Mr. Hockey himself, Gordie Howe, dropping the first puck to kick off a new era of Quinnipiac Athletics.

“Quinnipiac University had a bold vision to propel our ice hockey and basketball programs to a new level over 15 years ago,” said Greg Amodio, director of athletics. “A byproduct of that vision is the dual-arena we have today. The facility has been a driving force in advancing the experience and outcomes for our coaches and student athletes. And, it has become a hub of excitement for our alumni and fans who come out regularly to cheer on our Bobcats.”

The facility — one of only four twin arenas in New England — is home to Quinnipiac’s men’s and women’s basketball and hockey teams and the acrobatics and tumbling team.

“The Quinnipiac sports center stands as a vivid beacon of the university's unwavering commitment to Quinnipiac ice hockey,” said men’s ice hockey head coach Rand Pecknold. “The best fans in the country have cheered as the Bobcats established themselves as a perennial post-season powerhouse, earning a spot in the NCAA tournament seven times, and six in the past eight seasons a tournament was held.”

Over the years since its opening, the sports center has become home to the most anticipated game of the year, the annual Heroes Hat game where the Yale Bulldogs take on the Bobcats. The winning team is presented the FDNY helmet of the late Joseph Mascali, father of Quinnipiac alumni Chris ’05, Jen ’02 and Katie ’14. Mascali died while trying to save those trapped in the World Trade Center on September 11, 2001.

Every home basketball and ice hockey game is broadcast nationally on ESPN+.

“In this arena is the ice on which future NHL stars hone their skills, and where kids throughout the Northeast find role models and dream of one day being among the best,” said Pecknold, who has coached the team since before the sports center’s opening. “The facility is the envy of the conference, with a well thought-out design and all of the resources needed to for all-star athletes to be their best.”

Devon Toews, of the Colorado Avalanche, and Connor Clifton, of the Boston Bruins, are just two of the alumni who once called the sports center home.

The sports center continues to draw fans beyond the Northeast, but truly across the country — twice hosting the women's Women's ice hockey Frozen Four. The facility has also hosted the women's U.S. and Chinese national ice hockey teams.

On the other side of the arena, the women’s basketball team has earned the reputation of being one of the strongest teams in the MAAC, with 10 consecutive winning seasons and three NCAA tournament berths. Like Pecknold, women’s head basketball coach Tricia Fabbri recognizes the facility as a game-changer.

“It's been instrumental to our success over the past 15 years,” said Fabbri. “It's allowed us to recruit elite student-athletes and offers them world-class training, media and locker room facilities.”

She said there is no doubt in her mind that it helps differentiates Quinnipiac from other programs.

“It's a great venue to watch a game and remains one of the premiere facilities in the country,” Fabbri added. “Without a doubt, it's been a difference-maker.”

It’s all come full-circle for Charity Kuchyt ’07, associate director of university events, who still remembers the initial awe she felt when the sports center opened and now plans many of the very events that take place there.

"I can still remember touring the sports center as a student when it was opening; there was such great energy and excitement on campus,” she said. “To be there now, 15 years later putting on events as a staff member, it feels really special. I get to celebrate our Bobcats with a whole new generation of students and families."

In addition, the sports arena — seen high above Hamden for miles around — hosts more than just athletic events. Among the traditions include the Student Programming Board’s annual Wake the Giant show in the basketball arena, featuring artists like Kesha, Khalid and the late Bob Saget.

“I can’t imagine having our shows anywhere else,” said Shannon Flaherty ’22, president of the Student Programming Board and a member of the sports center’s fan engagement team. “Having this facility to host student events gives us the resources to host professional-level, student-run events and experiences.”

She said past Wake the Giant performers told her that the hospitality accommodations rival that of even Madison Square Garden.

“The spaces under the arena are incredible,” said Flaherty, who earned a national award for student leadership earlier this year. “It has given me the opportunity to personally have a leg up on my friends from other universities as I look to begin my career after graduation.”

And that’s exactly what Eric Grgurich, executive director of the facility, wants.

Grgurich, who has led all operations since its inception, said the sports center continues to evolve with the times — just last month installing major upgrades to its sound system in both arenas.

“This is easily one of the finest sports facility in the Northeast,” he said. “The university’s commitment to maintaining it and providing the resources needed for us to remain competitive in Athletics with a student focus is inspiring. Not all of my peers at other universities can say the same.”

When the facility opened, it marked the beginning of a major expansion period for Quinnipiac beyond the Mount Carmel Campus, ultimately leading the creation of numerous residence halls and the Rocky Top Student Center on the York Hill Campus. Two years later, the university opened its third campus — the North Haven Campus — just a few miles away.